A Low Cost Tester of Glaze Melt Fluidity
A One-speed Lab or Studio Slurry Mixer
A Textbook Cone 6 Matte Glaze With Problems
Adjusting Glaze Expansion by Calculation to Solve Shivering
Alberta Slip, 20 Years of Substitution for Albany Slip
An Overview of Ceramic Stains
Are You in Control of Your Production Process?
Are Your Glazes Food Safe or are They Leachable?
Attack on Glass: Corrosion Attack Mechanisms
Ball Milling Glazes, Bodies, Engobes
Binders for Ceramic Bodies
Bringing Out the Big Guns in Craze Control: MgO (G1215U)
Ceramic Glazes Today
Ceramic Material Nomenclature
Ceramic Tile Clay Body Formulation
Changing Our View of Glazes
Chemistry vs. Matrix Blending to Create Glazes from Native Materials
Concentrate on One Good Glaze
Cone 6 Floating Blue Glaze Recipe
Copper Red Glazes
Crazing and Bacteria: Is There a Hazard?
Crazing in Stoneware Glazes: Treating the Causes, Not the Symptoms
Creating a Non-Glaze Ceramic Slip or Engobe
Creating Your Own Budget Glaze
Crystal Glazes: Understanding the Process and Materials
Deflocculants: A Detailed Overview
Demonstrating Glaze Fit Issues to Students
Diagnosing a Casting Problem at a Sanitaryware Plant
Drying Ceramics Without Cracks
Duplicating Albany Slip
Duplicating AP Green Fireclay
Electric Hobby Kilns: What You Need to Know
Fighting the Glaze Dragon
Firing Clay Test Bars
Firing: What Happens to Ceramic Ware in a Firing Kiln
First You See It Then You Don't: Raku Glaze Stability
Fixing a glaze that does not stay in suspension
Formulating a Clear Glaze Compatible with Chrome-Tin Stains
Formulating a Porcelain
Formulating Ash and Native-Material Glazes

G1214M Cone 5-7 20x5 Glossy Base Glaze
G1214W Cone 6 Transparent Base Glaze
G1214Z Cone 6 Matte Base Glaze
G1916M Cone 06-04 Base Glaze
G1947U/G2571A Cone 10/10R Base Matte/Glossy Glazes
Getting the Glaze Color You Want: Working With Stains
Glaze and Body Pigments and Stains in the Ceramic Tile Industry
Glaze Chemistry Basics - Formula, Analysis, Mole%, Unity, LOI
Glaze chemistry using a frit of approximate analysis
Glaze Recipes: Formulate Your Own Instead
Glaze Types, Formulation and Application in the Tile Industry
Having Your Glaze Tested for Toxic Metal Release
High Gloss Glazes
How a Material Chemical Analysis is Done
How desktop INSIGHT Deals With Unity, LOI and Formula Weight
How to Find and Test Your Own Native Clays
How to Liner-Glaze a Mug
I've Always Done It This Way!
Inkjet Decoration of Ceramic Tiles
Is Your Fired Ware Safe?
Leaching Cone 6 Glaze Case Study
Limit Formulas and Target Formulas
Low Budget Testing of the Raw and Fired Properties of a Glaze
Low Fire White Talc Casting Body Recipe
Make Your Own Ball Mill Stand
Making Glaze Testing Cones
Monoporosa or Single Fired Wall Tiles
Organic Matter in Clays: Detailed Overview
Outdoor Weather Resistant Ceramics
Overview of Paper Clay
Painting Glazes Rather Than Dipping or Spraying
Particle Size Distribution of Ceramic Powders
Porcelain Tile, Vitrified or Granito Tile
Rationalizing Conflicting Opinions About Plasticity
Ravenscrag Slip is Born
Recylcing Scrap Clay
Reducing the Firing Temperature of a Glaze From Cone 10 to 6
Single Fire Glazing
Soluble Salts in Minerals: Detailed Overview
Some Keys to Dealing With Firing Cracks
Stoneware Casting Body Recipes
Substituting Cornwall Stone
Super-Refined Terra Sigillata
The Chemistry, Physics and Manufacturing of Glaze Frits
The Effect of Glaze Fit on Fired Ware Strength
The Four Levels on Which to View Ceramic Glazes
The Majolica Earthenware Process
The Physics of Clay Bodies
The Potter's Prayer
The Right Chemistry for a Cone 6 MgO Matte
The Trials of Being the Only Technical Person in the Club
The Whining Stops Here: A Realistic Look at Clay Bodies
Those Unlabelled Bags and Buckets
Tiles and Mosaics for Potters
Toxicity of Firebricks Used in Ovens
Trafficking in Glaze Recipes
Understanding Ceramic Materials
Understanding Ceramic Oxides
Understanding Glaze Slurry Properties
Understanding the Deflocculation Process in Slip Casting
Understanding the Terra Cotta Slip Casting Recipes In North America
Understanding Thermal Expansion in Ceramic Glazes
Unwanted Crystallization in a Cone 6 Glaze
Variegating Glazes
Volcanic Ash
What Determines a Glaze's Firing Temperature?
What is a Mole, Checking Out the Mole
What is the Glaze Dragon?
Where Do I Start?
Why Textbook Glazes Are So Difficult

Formulating Your Own Clay Body

Would you like the potential to be a totally independent potter? I am not saying to do it, just to know how to do it. The learning process could teach you to make better ware using commercial materials also. And incorporate native materials at least in part in your production. It can be worth it just for the "bragging rights"!

The first step is to find a clay in your area. If you are reading this you likely already have one. In either case, read the article (link below) on how to find and test your own native materials. Let's assume that what you have found is at least plastic, it can be formed.

Consider some of the possibilities of what you might have found:

-A best-case scenario is that you have porcelain stone from china, plastic white lithium feldspar. Add quartz, kaolin and bentonite are you are ready to make porcelain. PV Clay from California is a similar story. 3B clay from Plainsman Clays is even better. Although not white burning, it can produce cone 6 stoneware all by itself. With a small feldspar addition, porcelain.

-What might appear to be a worst-case scenario is that you have found a fireclay. What good would that be for pottery? More than you think. Fireclays are generally just the crude form of ball clays. Slurry and screen and add about 30% feldspar and you have a cone 6 stoneware. A super plastic one.

-If your clay is extremely sticky and takes a long time to dry it could be bentonitic. That means that it is best used as an additive to other clays that are less workable, to impart plasticity. Bodies made having a high percentage of bentonite can be thrown incredibly thin on the potter's wheel. But they must be dried very slowly to avoid cracking.

-If your clay is dark-colored (brown or red) then it could be a middle temperature stoneware (as demonstrated in your initial firing tests as described in the already-referenced article). Plainsman M2 is such a material. These clays are among the most sought after by stoneware potters for the beautiful natural-looking surfaces they can produce around 2200F. Because iron (which produces the brown color) is also a flux, these types of clays rarely have a firing curve the extends to cone 10.

-Dark colored clays can also be terra cotta clays. Terra cottas are also often shades of green and yellow. This demonstrates the amazing number of forms in which the iron oxide in the clays can exist, each having its own color. Terra cotta clays have a short firing range, but with modern kilns that is not a problem. Every clay has an optimal firing range at which it produces the most dense and strong fired product, terra cotta is no different. While the point of maximum density for mid and high temperature materials often never finds zero porosity, terra cotta materials often do. That is the density of glass, creating amazingly strong ware. Actually, firing shy of that, permitting some porosity, can produce beautiful red color and also very good strength. It can be rewarding and a real adventure, finding successful glazes and processes for this type of material.

-If your clay is grey or buff or even white, you may found a buff burning stoneware. These are common in nature, and obviously very useful. If they are not quite vitreous enough, a little talc (1-2%) may be all that is needed. Failing that, some feldspar should make them vitrify at cone 6. At cone 10 they could work all by themselves (Plainsman A3 is an example).

-You may be lucky enough to have found a kaolin. White, not very plastic, incredibly smooth. But having plenty of gravel and sand and mineral particle impurities. These clays may not look promising at first, but try to see them for what they could be if you screen out the impurities.

-If your clay is grey, even dark grey, you likely have a ball clay. Treat it like the fireclay mentioned above. That being said, some ball clays can be quite white in color. They are a very special find, gifting plasticity and fired whiteness in the same package. Typically they just need a non-plastic filler. Since ball clays are refractory, you need to add feldspar anyway, so that does double duty as the filler and plasticity cutter. It is also likely that some quartz will be needed for glaze fit, that will further cut the plasticity and bring it into the range of what a throwing body should be.

In any of the clays above you may encounter solubles salt that cause efflorescence (an unsightly scum on the fired surface, see the article referenced below for more info).

With all of these clays you will need to slurry and dewater them for use (unless you have a clay mixer). The advantage of slurrying is that it presents the option of wet-screening to remove impurities. 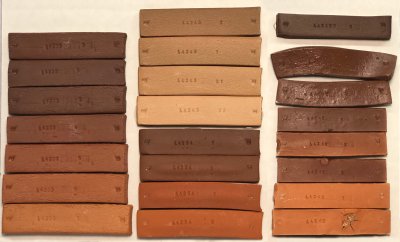 We tested four different clays (brought in by customers). One is from BC and three from Alberta. These fired sample bars show rich color, low soluble salts and high density and strength at very low temperatures. L4233 (left): Cone 06 to 3 (bottom to top). Reaches stoneware-density at cone 02 (middle bar). Plasticity is very low (drying shrinkage is only 4.5%). But, it is stable even if over-fired. L4254 (center bottom): Cone 04,02,3,4 (bottom to top). Very fine particled but contains an organic that is gassing and bloating the middle two bars. L4243: Fires lighter and looks stable here (cone 02,01,1,2 shown) but melts suddenly less than a cone above the top bar (well before vitrification is reached). L4242 (right): Hyper-plastic, with 12% drying shrinkage! Already melting by cone 02 (third from top). Achieves almost zero porosity (porcelain density) at cone 04 (#2 bar). Even when mixed with 20% kaolin and 20% silica it still hits zero porosity by cone 1. What next? I'll mix L4233 (left) and L4242 (right), that should produce stoneware density at cone 02 (about 1% porosity).

The top pile of clay can make one million coffee mugs. The bottom one can glaze ten million! 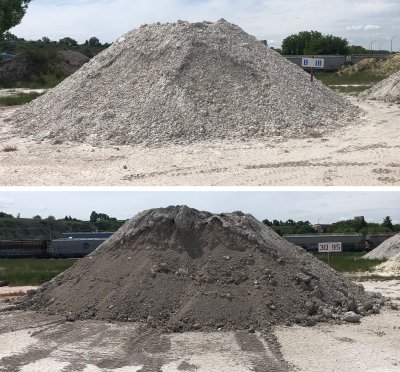 These are raw clays behind the Plainsman Clays plant. The top one is a middle temperature stoneware. All it needs is a little bentonite (about 2-3%) to be a plastic, smooth, vitreous throwing body. If it was not mature at cone 6, that would be easy to fix by the addition of a little feldspar. Any fired-speck-producing impurities can be removed by using a propeller mixer to slurry it and then putting it through a screen (e.g. 60 mesh). After dewatering on a plaster table I am ready-to-go. And that bottom pile? That is the main ingredient in Ravenscrag Slip. All it needs is some feldspar and frit to be a base glaze at cone 6. It is non-plastic and easy to screen (although not really needed since it has few particulate impurities). Likely there are clays in your area you could use to make your own clay bodies and glazes also. The key is to characterize the material first so you know what type of body it would be best for and what to add to get it there.

Two-material porcelain much better with ball clay than kaolin 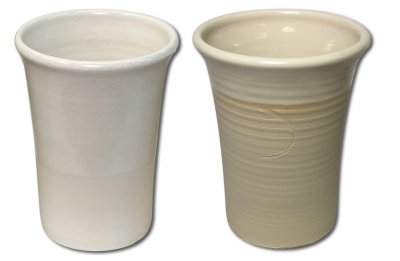 Left: 65% #6Tile kaolin and 35% nepheline syenite. It's white but crazes the glaze and has 1% fired porosity (measured in the SHAB test). Thus it does not have porcelain density. Plasticity is very good. Right: 65% M23 Old Hickory ball clay and 35% nepheline syenite. The glaze fits, the body has zero porosity (very dense) and plasticity is fantastic! The body on the left needs a 20% silica addition (to stop crazing) and 5% more nepheline (to reduce porosity to porcelain levels). But the remaining 40% kaolin will not be nearly enough for a workable plasticity (so bentonite will be needed). The body on the right does not need fixing because ball clay is easier to flux with feldspar and it contains its own natural silica.