A 'phase' of a material is a physically different molecular or crystal structure induced by a set of conditions (i.e. temperature, pressure). Phases of silica, for example, are chemically the same but have different physical properties. If significant differences are imposed a phase will have its own name (i.e. diamond, graphite are phases of carbon). If differences are not significant an alteration of the same mineral name is used (i.e. alpha quartz, beta quartz). It is important to realize that a phase exists as a recognition of a physical change, not a chemical one. These changes are measurable by instruments such as a microscope or dilatometer. 'Cristobalite' is a phase of silica and has very different properties than quartz, however they are chemically the same. The former can be created by submitting quartz to a high temperature and holding it there.
Catalysts encourage chemical reaction thus they would not be associated with phase changes. However the term 'catalyst' is used to refer to conditional changes that effect phase changes. 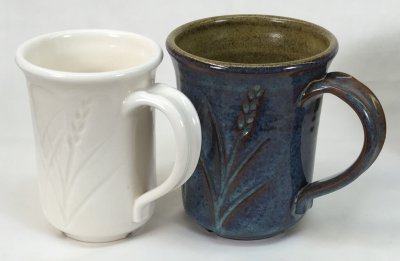 Frits melt so much more evenly and trouble free 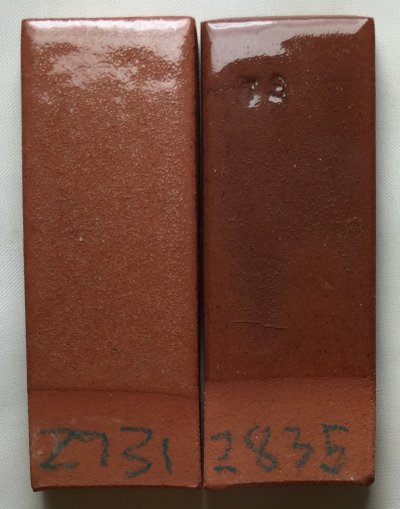 These two specimens are the same terra cotta clay fired at the same temperature (cone 03) in the same kiln. The chemistry of the glazes is similar but the materials that supply that chemistry are different. The one on the left mixes 30% frit with five other materials, the one on the right mixes 90%+ frit with one other material. Ulexite is the main source of boron (the melter) in #1, it decomposes during firing expelling 30% of its weight as gases (mostly CO2). These create the bubbles. Each of its six materials has its own melting characteristics. While they interact during melting they do not mix to create a homogeneous glass, it contains phases (discontinuities) that mar the fired surface. In the fritted glaze all the particles soften and melt in unison and produce no gas. Notice that it has also interacted with the body, fluxing and darkening it and forming a better interface. And it has passed (and healed) most of the bubbles from the body.