The fired glaze exhibits a network of fine cracks. These may be plainly visible after firing or may need enhancement with ink. Crazing may also appear after a period of time or after ware has been exposed to thermal shock. Fired strength (an thus functional ware quality) are directly related to crazing since ware strength is enhanced by having the glaze under slight compression whereas it is severely reduced (up to four times less) when the glaze is under tension. If the underlying clay matrix is porous and soaks up water then safety could be a concern with crazed ware since the cracks could be wide enough to provide a friendly breeding ground for colonies of bacteria. Containers used to store food are a special concern since a small colony in a crack can become a large culture in the food. If you have any doubt whether this is an important issue ask a commercial food service inspector about the subject.

Is the crazing a result of mistreatment of ware during use?

If pieces must survive considerable thermal shock during use, then both ware and glaze need to have a low and linear thermal expansion curve and they must be compatible. This is difficult to achieve in low fire ware because little mullite or other low-expansion silicate minerals develop during firing. If your low fire body contains significant talc, reduce or eliminate it (also adjust glazes to have a lower expansion so they continue to fit the body). If your high fire body develops non-linear expanding cristobalite during firing, find a way to reduce this.

Is crazing a result of inappropriate choice of manufacturing method or materials?

High temperature firing is by far the best for the production of low-expansion ware. Many more minerals are available for both body and glaze mixes and higher temperatures produce low-expansion silicates and aluminates that give tough glaze and body matrixes capable of withstanding forces that might otherwise cause crazing.

If ceramic ware is porous it can soak up water that causes the ware to expand, thereby putting tension on the glaze and crazing it.

Is crazing due to a simple thermal expansion mismatch between body and glaze?

Fired ceramic expands and contracts as it is heated. If the fired glaze has a significantly higher co-efficient of expansion than the body then no amount of careful firing or thin glazing will avoid the inevitable crazing. This is by far the most common cause of crazing and solution strategies are case studies of applying ceramic calculations to solve problems. If even only one piece crazes it is often a sign that all the other ware in that kiln will eventually craze. Such glazes usually need drastic changes since crazing is a visible manifestation of a fit problem that has already greatly reduced ware strength. Lower temperatures are far more sensitive in this respect in that there is a much narrower range within which a glaze and body will be compatible.

To improve glaze fit adjust the clay body to give it higher expansion and thereby the greater contraction that compresses glazes to prevent crazing (i.e. increase silica for high temperature bodies, talc at low fire). You can also adjust the glaze to reduce its expansion. There are many ways to do this. For example, if the glaze is melting well and it is not a matte, try increasing the silica. Or try introducing boron at the expense of some of the flux since B2O3 contributes to both glass development and melting. You can also introduce fluxing oxides of lower expansion at the expense of those with higher expansion in such a way that the fired properties are not changed too much; for example try adding CaO, MgO, or ZnO at the expense of Na2O and K2O (crazing is most serious with sodium and potassium glazes, to demonstrate mix nepheline syenite and water and apply as a glaze and fire at high temperature). If your glaze is opaque try using more low-expansion zirconium opacifier or use it instead of tin or titanium. Zirconium opacifiers are also useful in transparent glazes; they have a threshold amount under which they do not normally opacify. Thus it might be possible to add as much as 5% to make the glaze both more durable and reduce its expansion.

Consider also the elasticity of the glaze as even relatively well fitted ones can craze if exposed to radical temperature changes. High levels of sodium, potassium and calcium can make the glaze more brittle (the former also increase thermal expansion). Boric oxide is known to improve elasticity.

If the body expansion is too low (i.e. ovenware and flameware bodies) it can be very difficult to fit a glaze that has the desired visual characteristics. Lithium can dramatically reduce the thermal expansion of glazes, but its use requires a lot of testing since its contribution is not linear and it introduces other dynamics that must be considered.

Could the Coloring Oxides in the Glaze be Involved?

Generally increased additions of iron and copper oxide to a glaze will reduce crazing (if they are present in adequate amounts; beyond 1 or 2 percent). Cobalt could have a moderate lowering effect, but since so little is typically used in glazes it will not be significant.

Is the crazing a result an under fired body?

Underfired bodies may contain uncombined alkali or alkaline earths than can react with water and swell the body. You can test this by putting a glazed sample in a pressure cooker for several hours or put a shard into an autoclave to see if crazing appears. Calcium carbonate is added to talc bodies to minimize moisture expansion.

Is the crazing a result of sloppy manufacture?

Normally a glaze/body combination with compatible expansion characteristics will withstand considerable firing and usage abuse without displaying signs of crazing. However, in some cases, a glaze that otherwise 'fits' will craze if applied very thick.

Also, if the kiln is cooled very quickly or unevenly, especially if ware is thicker, the severe stresses can produce crazing. However remember that a glaze's ability to withstand normal or even quick kiln cooling is an indicator of its ability to resist crazing in normal use.

Is ware crazing days or even months after firing?

If you are cooling your kiln very slowly to prevent ware from crazing it is likely the glaze does not fit. While it may be true that slower firing seems to solve the problem, time will bring out the crazing that the kiln did not. In fact if you must slow cool to prevent crazing it is a virtual certainty that your glaze needs to have its thermal expansion reduced.

Special Note: Solving crazing and shivering problems while retaining the visual character of a glaze is a classic problem for the application of ceramic chemistry calculations. There is a chapter in the lesson section of the INSIGHT manual on how to deal with this problem, it is a very practical approach. 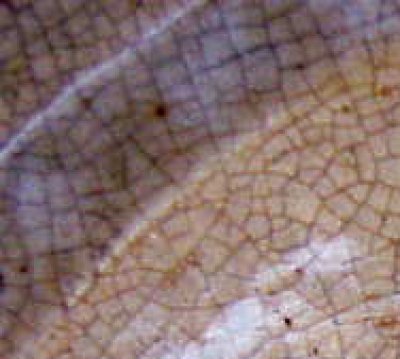 A down side of high feldspar glazes: Crazing! 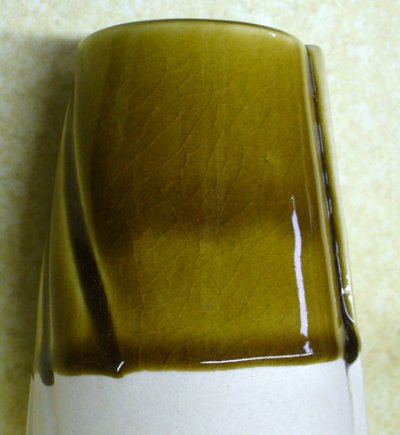 This reduction celadon is crazing. Why? High feldspar. Feldspar supplies the oxides K2O and Na2O, they contribute to brilliant gloss and great color (at all temperatures) but the price is very high thermal expansion. Any glaze having 40% or more feldspar should turn on a red light! Thousands of recipes being traded online are high-feldspar, some more than 50%! There are ways to tolerate the high expansion of KNaO, but the vast majority are crazing on all but high quartz bodies. Crazing is a plague for potters. Ware strength suffers dramatically, pieces leak, the glaze harbours bacteria, crazing invites customers to return pieces. The fix: A transparent base that fits your ware. Add colorants and opacifiers to that. Another fix: substitute some of the KNaO for a lower expansion flux (like MgO, SrO, CaO, Li2O) and add as much SiO2 and Al2O3 as the glaze will take (using glaze chemistry software).

Use a low silica porcelain to craze test your glazes 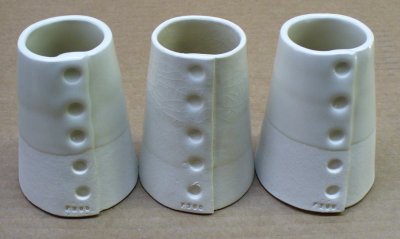 Cone 6 transparent glaze testing to fit Plainsman M370: Left and right: Perkins Studio Clear. The far left one is a very thick application. Center: Kittens Clear. The porcelain for all is Plainsman P300. Why? Because P300 is much more likely to craze the glaze because it has a lower silica content (about 17% and only kaolin whereas M370 has 24% silica plus the free quartz that comes with the 20% ball clay it also contains). If a thick layer works on P300 it is a shoe-in to fit M370. If it also passes the oven:icewater test. 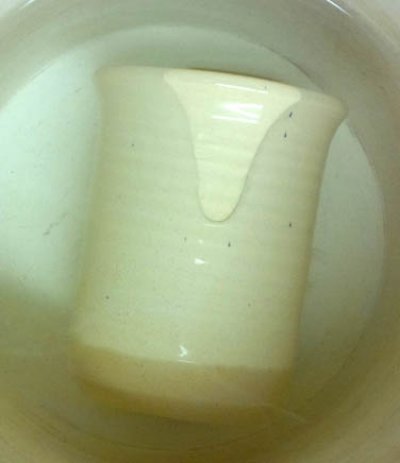 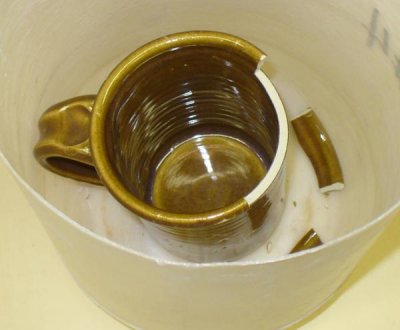 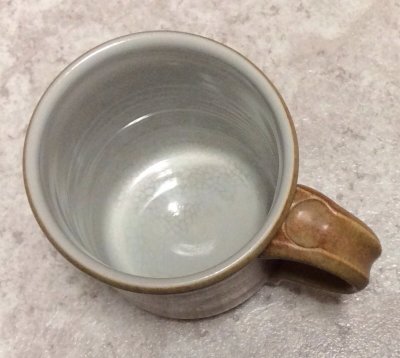