Crawling is where the molten glaze withdraws into 'islands' leaving bare clay patches. The edges of the islands are thickened and smoothly rounded. In moderate cases there are only a few bare patches of clay, in severe cases the glaze forms beads on the clay surface and drips off onto the shelf. The problem is by far most prevalent where bisque-applied glazes contain excessive plastic clay content or are applied thickly or in multiple layers. It is also common in once-fire ware where it is more difficult to achieve a good bond with the body surface.

Is the glaze shrinking too much during drying?

If the dried glaze forms a network of cracks it is a sign that the glaze is shrinking too much. The fault lines provide places for the crawling to start (especially where the islands the cracks delineate raised edges that are no longer in contact with the body). There are a number of possible contributors:

It is possible to create glaze slurries that gel and flow extremely well, dry hard and do not crack by using the right kaolin (i.e. EPK) or ball clay (i.e. Old Hickory #5, No. 5 Glaze) in adequate amounts. It is very important to realize that many ball clays and kaolins to not produce glazes of good slurry properties (without additives), a simple substitution can make a remarkable difference. It may not seem that glaze chemistry is related to this subject of getting the right type and right amount of clay in a recipe. But it very much is. Why? Because the ability to juggle a recipe to source Al2O3 from a clay or a feldspar/frit, as needed, enables controlling the amount of clay in the recipe while maintaining its fired character. Chemistry also gives you the ability to switch between different types of clay (that have different oxide makeups).

Is the glaze's dry-bond with the ware surface inadequate?

The mechanism of the bond between dry glaze and body is simply one of physical contact, the roughness of the ware surface copmbined with the ability of the liquid glaze to flow into all the tiny surface pores and irregularities and the degree to which it is able to dry hard without shrinking too much, these determine its ability to 'hang on'.

Does application technique or handling compromise the fragile glaze-body bond?

Is the glaze drying too slow?

Is the problem happening during firing?

Is there a problem with the body?

Is this problem inherent in the type of glaze being used?

Matte glazes are more prone to crawling. Why? Because they usually have high Al2O3. The major contributor of that oxide is clay, especially kaolin. Matte glazes commonly have 35% kaolin in the recipe. Use part calcined material, part raw kaolin to deal with this problem.

Many pottery glazes have high feldspar and low clay contents, simply because they were improperly formulated. Using chemistry, you can shift the recipe to supply part of the Al2O3 from kaolin instead of the feldspar, reducing the feldspar percentage (this involves corrections in the amount of silica and other materials also).

Slip glazes can have 70, 80 or even 90% of a slip clay in them. Alberta Slip and Ravenscrag slip are examples. These materials melt by themselves to make glazes. But they are clays, they shrink. Follow the instructions from the manufacturer on how to use them properly. 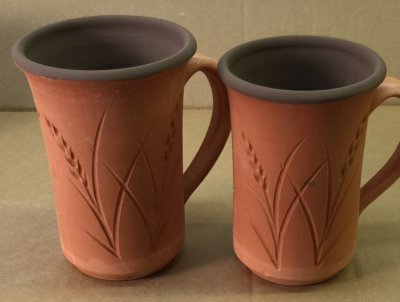 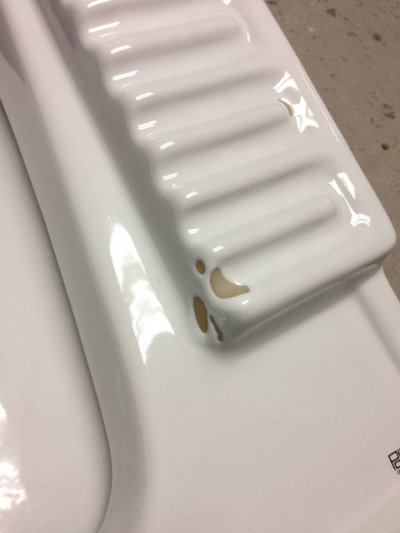 The original recipe had a very low clay content, sourcing almost all of its Al2O3 from feldspar instead. Although the glaze slurry was maintained at 1.78 specific gravity (an incredibly high value) and thus would have had very low shrinkage, it did not stick and harden well enough to the ware. Why? Lack of clay content in the glaze. The fix was to source much more of the Al2O3 from kaolin instead of feldspar. The reduction in feldspar shorted the glaze on KNaO and SiO2 so these were sourced from a frit and pure silica instead (the calculations to do this were done in Insight-live.com). The change also provided opportunity to substitute some of the KNaO with lower expansion CaO. This reduced the thermal expansion and reduced crazing issues.

Adding water actually made this white engobe run less? How?

The white slip (applied to a leather hard cup) on the left is dripping downward from the rim (even though it was held upside down for a couple of minutes!). Yet that slurry was very viscous with a 1.48 specific gravity. Why? Because it was not thixotropic. The fix? I watered it down to 1.46 (making it runny) and added pinches of powdered epsom salts (while mixing vigorously) until it thickened enough to stop motion in about 1-2 seconds on mixer shut-off. But that stop-motion is followed by a bounce-back. That is the thixotropy. It is easy overdo the epsom salts (gelling it too much), I add a drop or two of Darvan to rethin it if needed. When the engobe is right it gels after about 10 seconds of sitting, so I can stir it, dip and extract the mug, shake to drain it and then it gels and holds in place. Keep in mind, this is a pottery project. In industry they deflocculate engobes to reduce water content. But a deflocculated slurry can still be gelled (if it is runny).

The same engobe. Same water content. What is the difference? 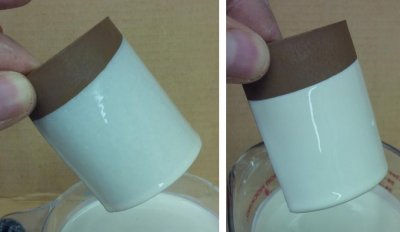 The engobe on the left, even though it has a fairly low water content, is running off the leather hard clay, dripping and drying slowly. The one on the right has been flocculated with epsom salts (powdered), giving it thixotropy (ability to gel when not in motion but flow when in motion). Now there are no drips, there are no thin or thick sections. It gels after a few seconds and can be uprighted and set on the shelf for drying.

Can you actually throw a Gerstley Borate glaze? Yes! 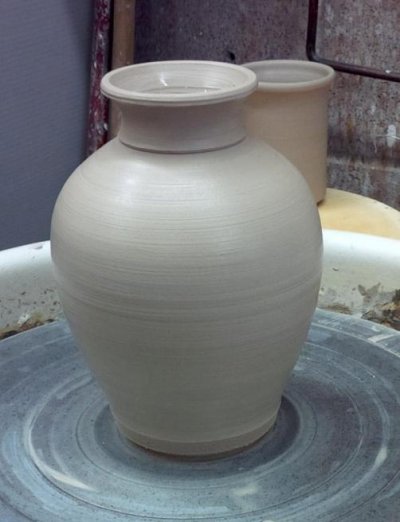 Worthington Clear is a popular low fire transparent glaze recipe. It has 55% Gerstley Borate plus 30% kaolin (Gerstley Borate melts at a very low temperature because it sources lots of boron). GB is also very plastic, like a clay. I have thrown a pot from this recipe! This explains why high Gerstley Borate glazes often dry so slowly and shrink and crack during drying. When recipes also contain a plastic clay the shirinkage is even worse. GB is also slightly soluble, over time it gels glaze slurries. Countless potters struggle with Gerstley Borate recipes. How could we fix this one? First, substitute all or part of the raw kaolin for calcined kaolin (using 10% less because it has zero LOI). Second: It is possible to calculate a recipe having the same chemistry but sourcing the magic melting oxide, boron, from a frit instead. 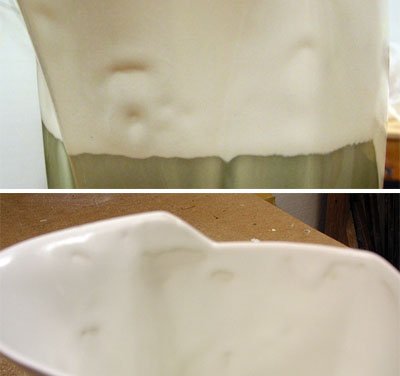 Why does the glaze on the right crawl?

This is G2415J Alberta Slip glaze on porcelain at cone 6. Why did the one on the right crawl? Left: thinnest application. Middle: thicker. Right thicker yet and crawling. All of these use a 50:50 calcine:raw mix of Alberta Slip in the recipe. While that appears fine for the two on the left, more calcine is needed to reduce shrinkage for the glaze on the right (perhaps 60:40 calcine:raw). This is a good demonstration of the need to adjust raw clay content for any glaze that tends to crack on drying. Albertaslip.com and Ravenscrag.com both have pages about how to calcine and calculate how much to use to tune the recipe to be perfect.

A good example of the superiority of a frit 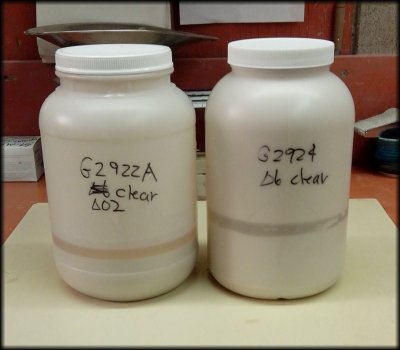 Both of these glazes were made as 1000 gram batches and then mixed with the necessary amount of water to produce a slurry of the correct consistency. The one on the left is a fritted glaze with 20% kaolin, the one on the right is a Gerstley Borate based raw glaze (30% GB + feldspar, silica, ball clay). The GB glaze required much more water and gelled shortly after (it also tends to dry slowly and crack during drying on the ware). The fritted glaze has very good slurry and application properties. 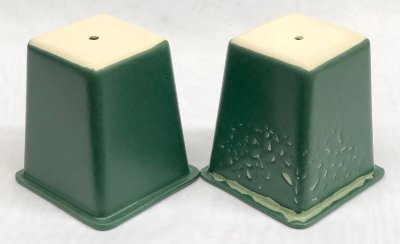