A base transparent glaze recipe created by Tony Hansen for Plainsman Clays, it fires high gloss and ultra clear with low melt mobility.

A cone 6 transparent general purpose base recipe developed at Plainsman Clays by Tony Hansen (see link to go there below, it contains technical and mixing information about the recipe).

This is an adjustment to an original recipe named Perkins Studio Clear (it contains alot more SiO2 and uses a frit instead of Gerstley Borate as the boron source). It is just as shiny and transparent, has a less fluid melt and will be harder and for stable. With this change this is a really stunning transparent glaze. We have found that it will even tolerate 5% more silica than what is shown here, yet still smooths out well. The reason why that is so good is that higher silica contents produce a more durable glass.

In our testing this glaze survives a 300F oven-to-icewater test without crazing on Plainsman M370 (25-Porcelain using Nepheline, Tile#6 Kaolin, silica and Old Hickory ball clay. It is less affected than the original when the application is too thick (minimal bubbles and crazing).

If you just want to mix it the traditional way, then start with 90 water to 100 powder (by weight) and agitate well using a propeller mixer. Then add more water until it is creamy, try it, adjust, etc. However this recipe has the best suspension and application properties when it is thixotropic (that involves mixing it thinner than normal and gelling it using Epsom salts). Target a specific gravity of 1.43-1.44 (equal weights of water and powder should be slightly above this). Then about add 1g of Epsom salts per 1000g powder to increase thixotropy. This should make it creamy and it should gel after a few seconds on standing still (add more Epsom salts if needed, but be careful, it is easy to over-do it).

Since the slurry is not too far from 50:50 water:powder, you could add colors and opacifiers on that basis. For example, 1000g of slurry has about 500g of powder. For white you need 10% zircopax, so that is 50g. This is approximate, but suitable for testing. Later if you decide a mix has promise then mix-from-scratch with the right percentages.

Screen through 80 mesh (tiny wollastonite agglomerates are possible, they will not break down without screening).

Plainsmanclays.com makes this recipe as a premixed powder. The glazes section on their site has additional info.

If this crazes see the links below. This glaze melts early, it is not suitable for decals which need refining to cone 022.

Mason stains in a cone 6 clear base 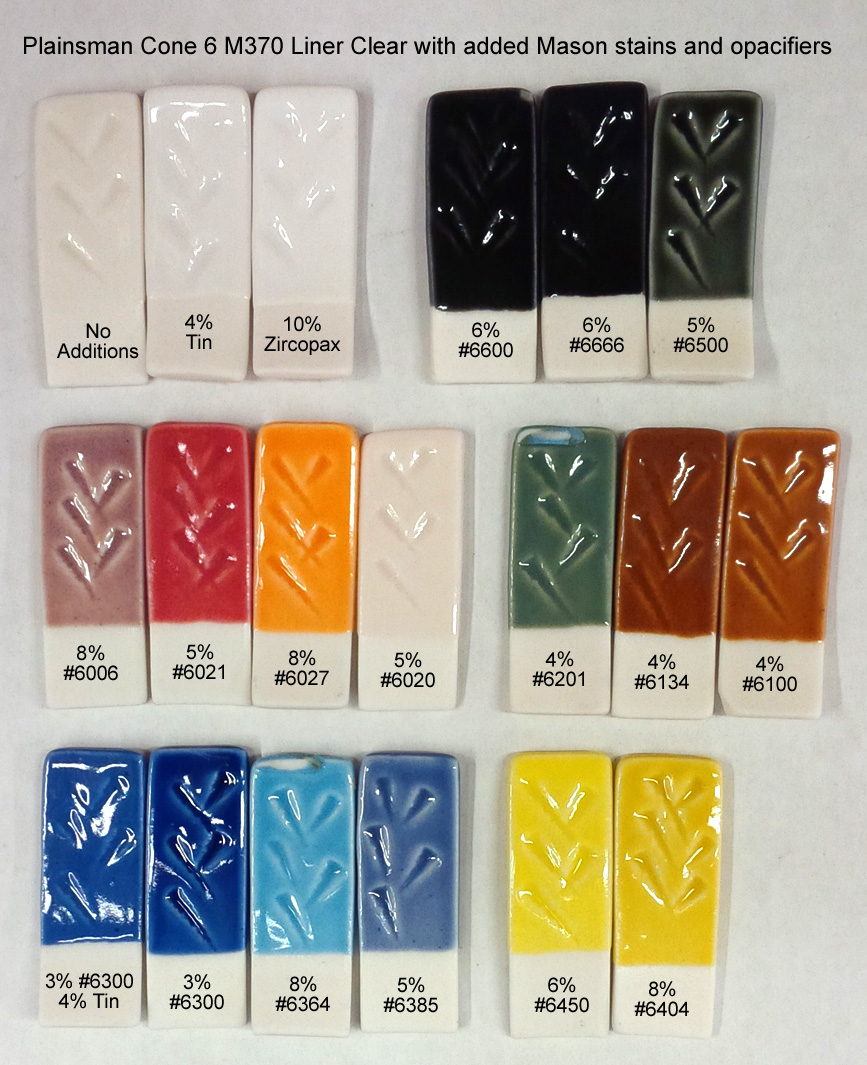 These are Mason stains added to cone 6 G2926B clear liner base glaze. Notice that the chrome tin maroon 6006 does not develop as well as the G2916F glossy base recipe. The 6020 manganese alumina pink is also not developing. Caution is required with inclusion stains (like #6021), if they are rated to cone 8 they may already begin bubbling at cone 6 is some host glazes.

Improving a clear by substituting frit for Gerstley Borate 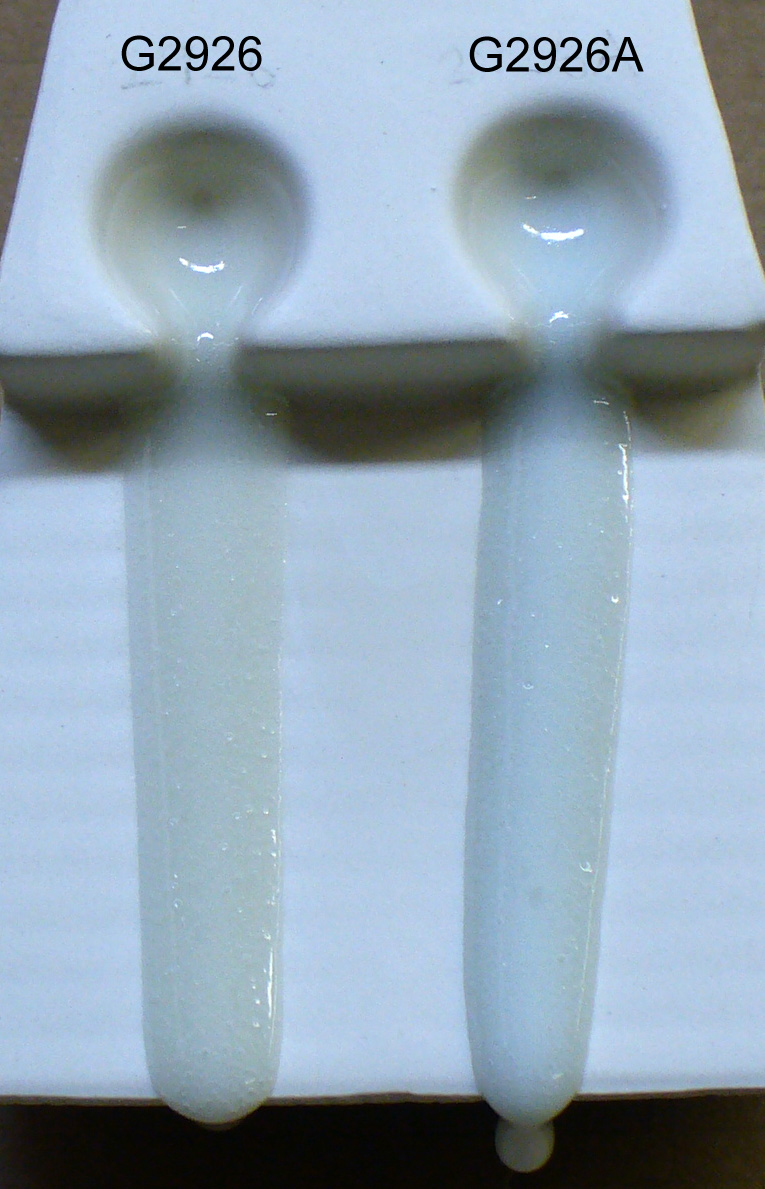 Melt fluidity test showing Perkins Studio clear recipe original (left) and a reformulated version that sources the boron from Ferro Frit 3134 instead of Gerstley Borate (right). The later is less amber in color (indicating less iron) and it melts to very close to the same degree.

This cone 6 transparent looked good, but I still improved it alot 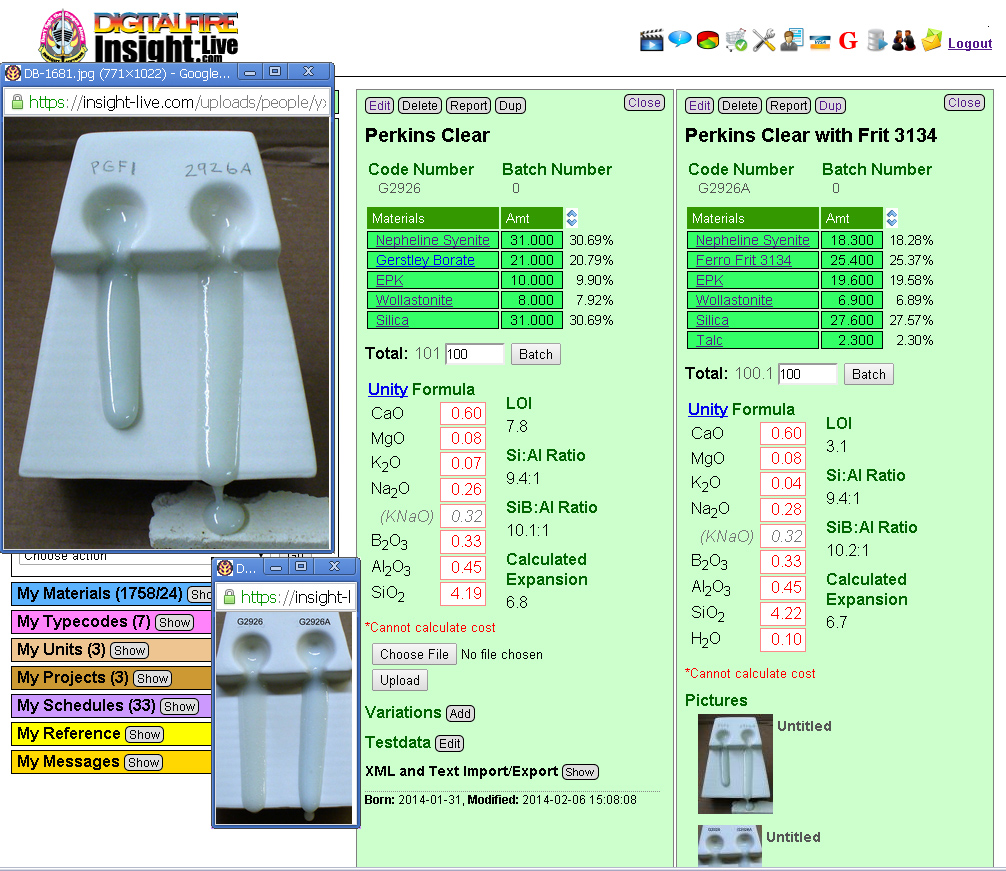 The green boxes show cone 6 Perkins Studio Clear (left) beside an adjustment to it that I am working on (right). I am logged in to my account at insight-live.com. In the recipe on the right, code-numbered G2926A, I am using the calculation tools it provides to substitute Frit 3134 for Gerstley Borate (while maintaining the oxide chemistry). A melt-flow GLFL test comparison of the two (bottom left) shows that the GB version has an amber coloration (from its iron) and that it flows a little more (it has already dripped off). The flow test on the upper left shows G2926A flowing beside PGF1 transparent (a tableware glaze used in industry). Its extra flow indicates that it is too fluid, it can accept some silica. This is very good news because the more silica any glaze can accept the harder, more stable and lower expansion it will be. You might be surprised how much it took, yet still melts to a crystal clear. See the article to find out.

Commercial glazes on decorative surfaces, your own on food surfaces 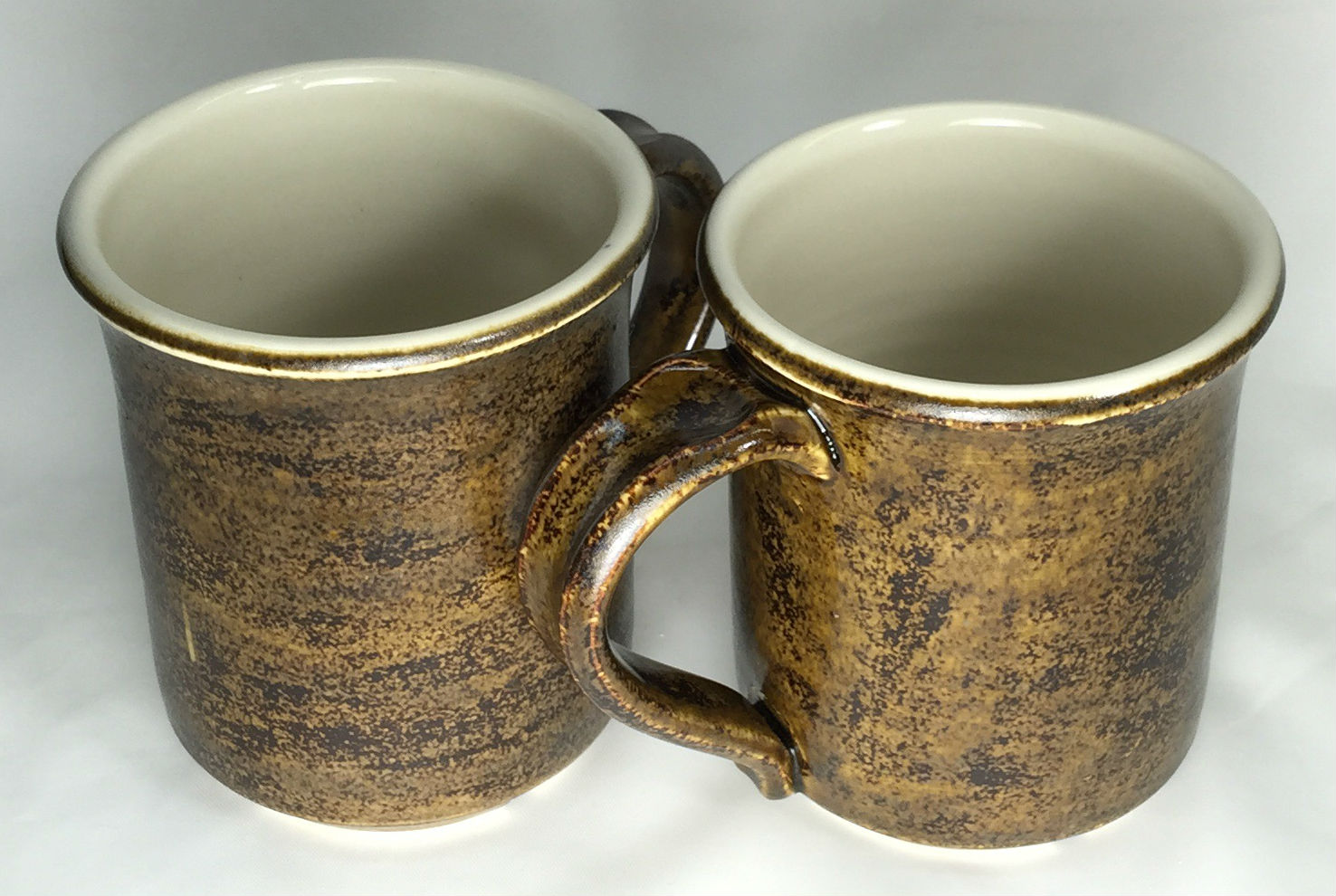 These cone 6 porcelain mugs are hybrid. Three coats of a commercial glaze painted on outside (Amaco PC-30) and my own liner glaze poured in and out on the inside (G2926B). When commercial glazes (made by one company) fit a stoneware or porcelain (made by another company), without crazing or shivering, it is purely an accident! So use them on the outside. But for inside food surfaces make or mix your own. When you know the recipe you can tune the thermal expansion. And the degree of melt. And the application properties. And you can use quality materials to source a balanced chemistry. The place to start understanding your glazes, organize testing and development and document everything is an account at Insight-live.com. 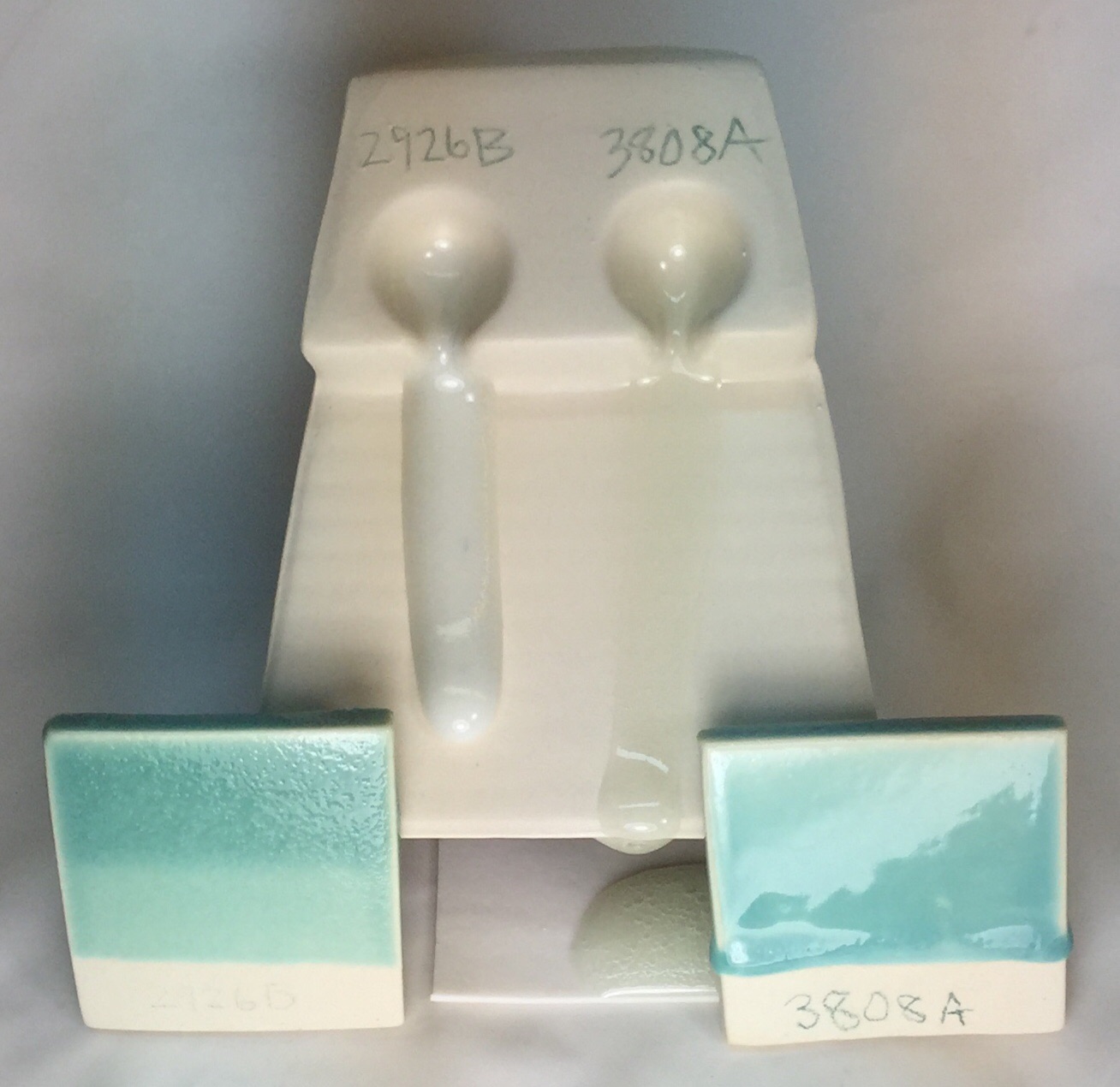 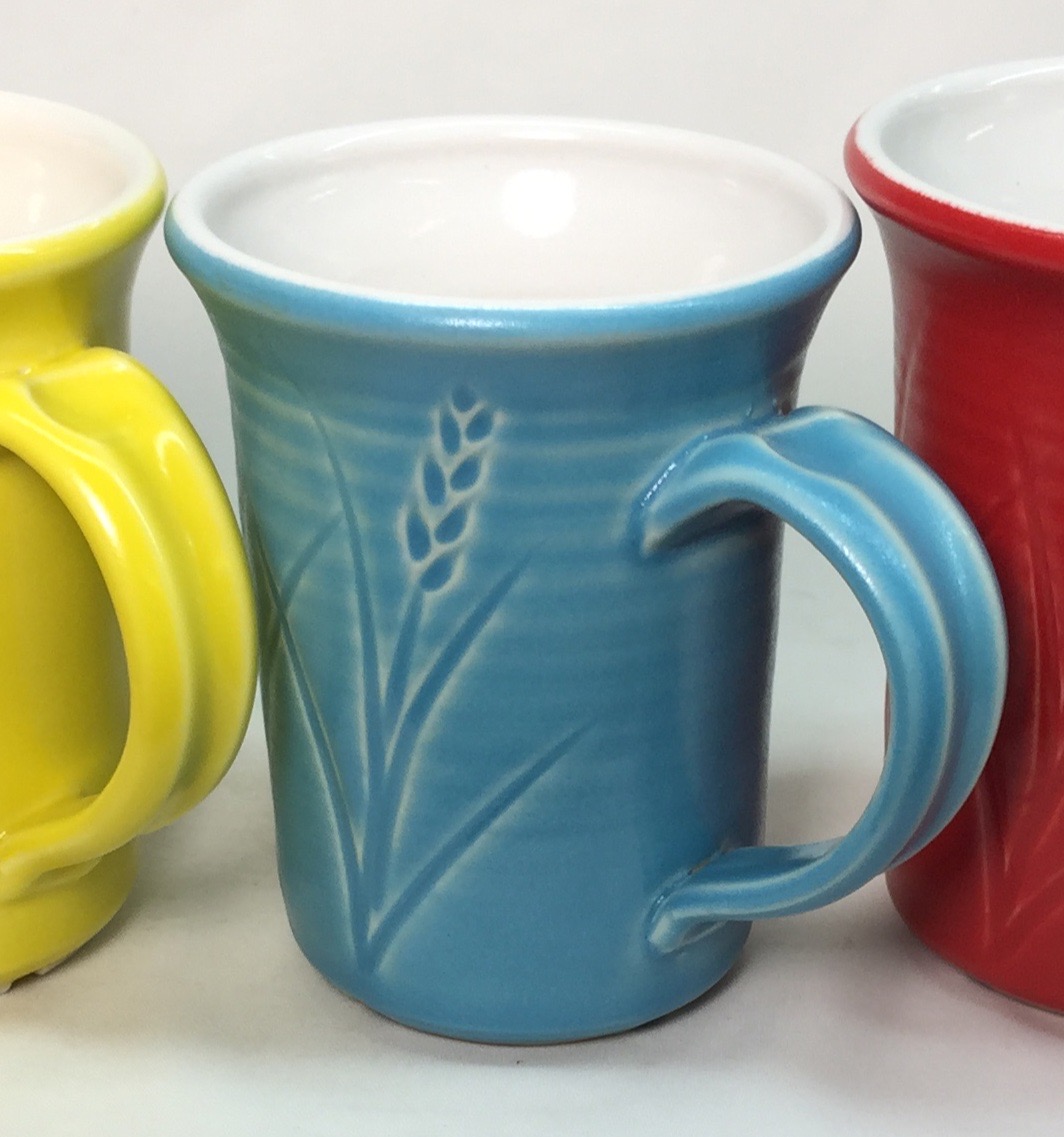 G2926B has proven to be my most durable, crystal clear, non-crazing, easy-to-use general purpose cone 6 base glaze (from dozens I developed). However, some porcelains (e.g. Plainsman P300) need an even lower thermal expansion. G2926S adjusts "B" (by adding low-expansion MgO at the expense of high-expansion KNaO). Yet it has the same gloss. The insides of these P300 mugs use it (with 10% added Zircopax to make white). "S" is not an all-purpose recipe, it could shiver on high silica bodies, use it if G2926B fails an IWCT test for crazing. These mugs were fired using the PLC6DS firing schedule, the outside glazes are G2934Y silky matte with added stains.

An example where adding silica really helps a glaze 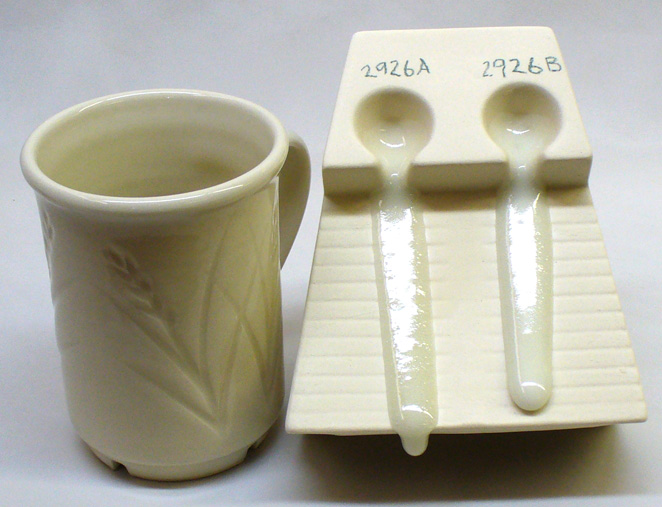 The flow on the left is an adjusted Perkins Frit Clear (we substituted frit for Gerstley Borate). It is a cone 6 transparent that appeared to work well. However it did not survive a 300F oven-to-icewater IWCT test without crazing on Plainsman M370. The amount of flow (which increases a little in the frit version) indicates that it is plenty fluid enough to accept some silica. So we added 10% (that is the flow on the right). Now it survives the thermal shock test and still fires absolutely crystal clear.

Catching the light on a translucent porcelain 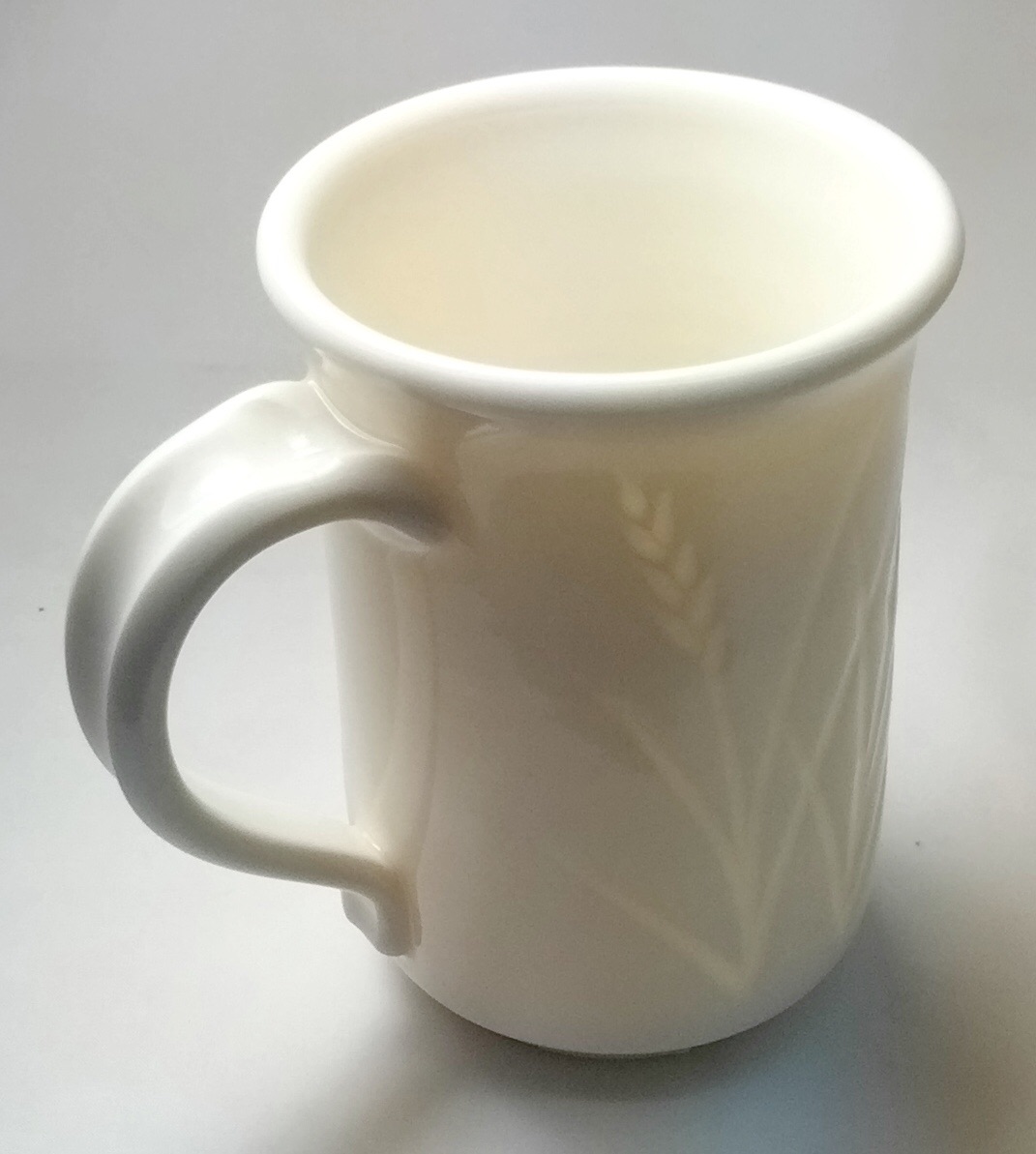 This is Plainsman translucent Polar Ice firing at cone 6 with a transparent base glaze. Made by Tony Hansen in 2014.

G2925B glaze can precipitate crystals like this over time 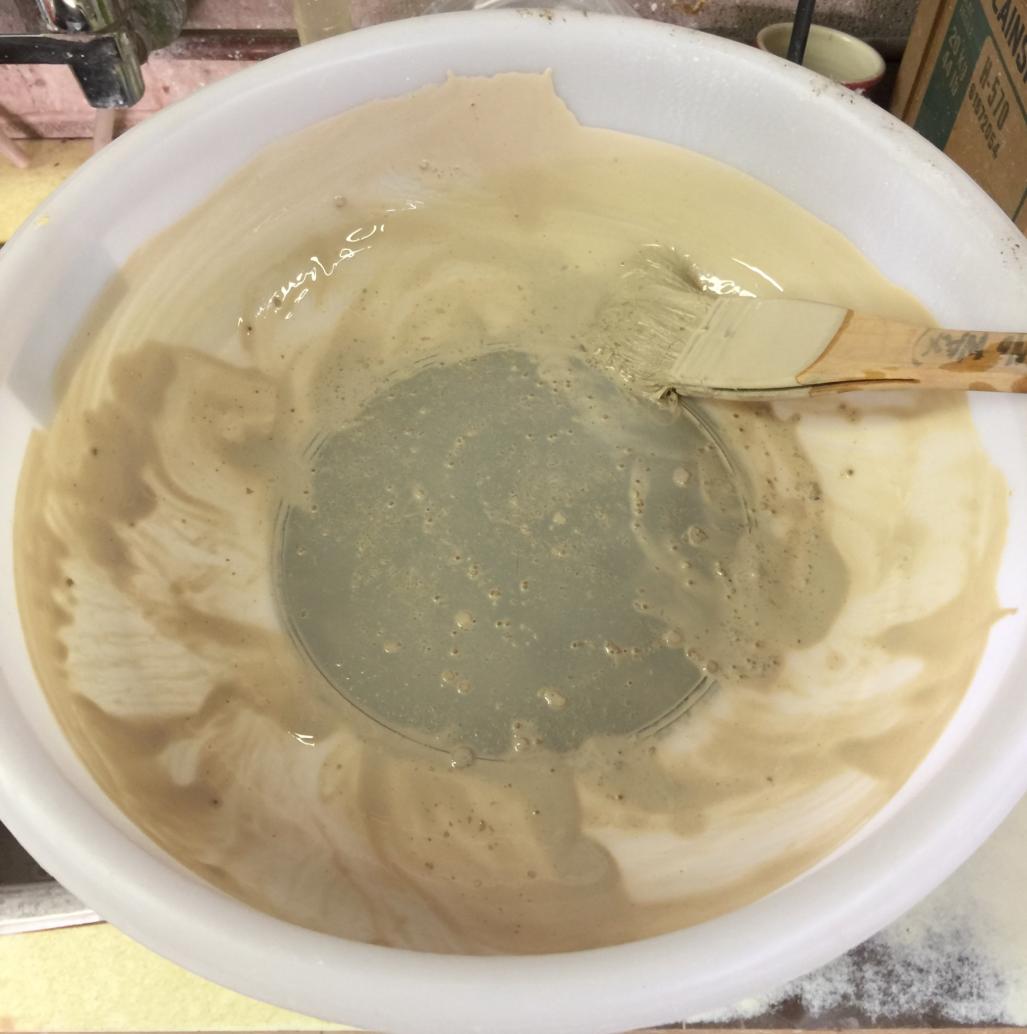 If this happens you need to screen it. There is nothing unusual in the recipe, this can happen to any glaze that contains frits or other slightly soluble materials. 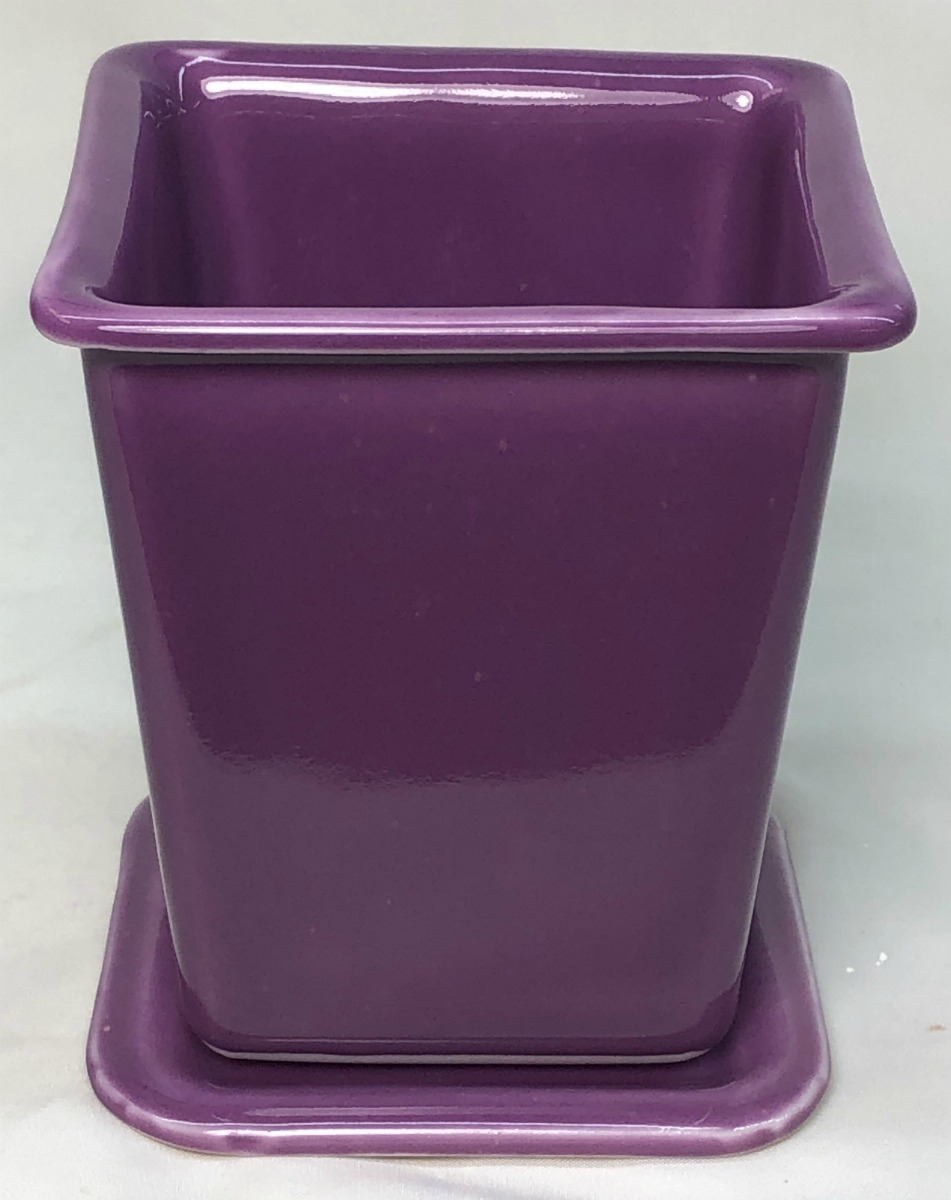 2% zircon also was also added, it helps prevent micro-bubbling. The PLC6DS (drop and soak) firing schedule was used. The G3806 base clear glaze is normally better than G2926B for really bright colors but this stain is an exception. 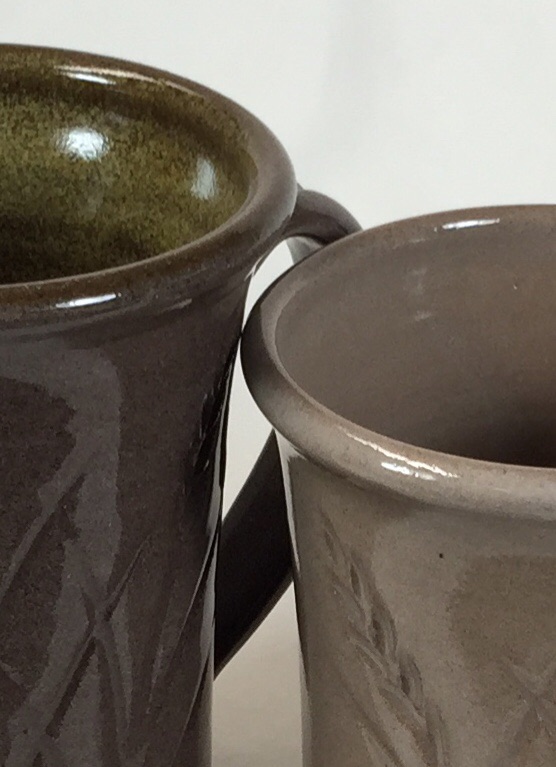 These two glazes are both brilliant glass-like super-transparents. But on this high-iron stoneware only one is working. Why? G3806C (on the outside of the piece on the left) melts more, it is fluid and much more runny. This melt fluidity gives it the capacity to pass the micro-bubbles generated by the body during firing. G2926B (right) works great on porcelain but it cannot clear the clouds of micro-bubbles coming out of this body. Even the glassy smooth surface has been affected. The moral: You need two base transparents in which to put your colors, opacifiers and variegators. Reactive glazes need melt fluidity to develop those interesting surfaces. But they are more tricky to use and do not fire as durable.

Does it matter which transparent glaze you use over underglazes? Yes. 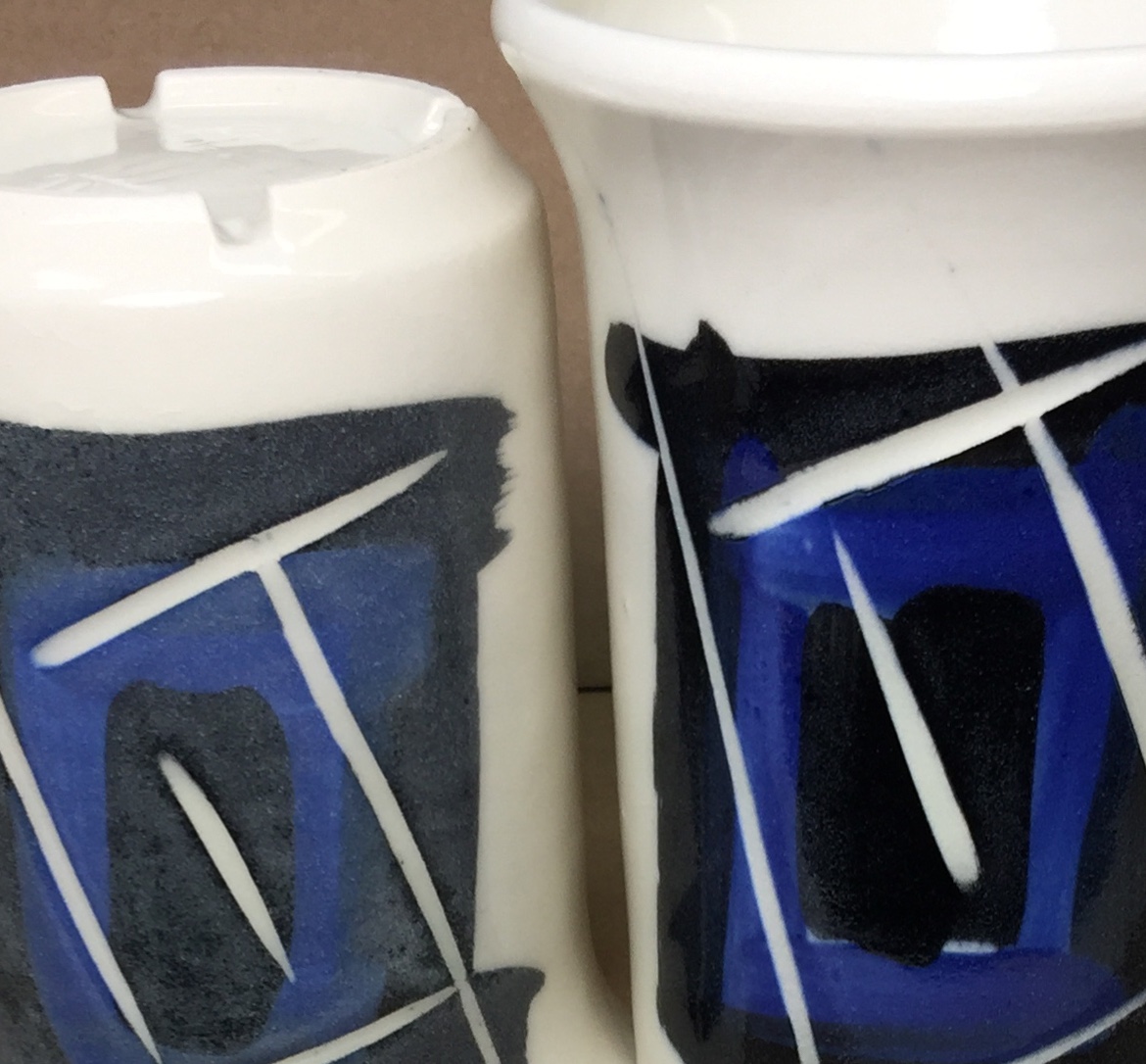 These porcelain mugs were decorated with the same underglazes (applied at leather hard), then bisque fired, dipped in clear glaze and fired to cone 6. While the G2926B clear glaze (left) is a durable and a great super glossy transparent for general use, its melt fluidity is not enough to clear the micro-bubbles generated by the underglazes. G3806C (right) has a more fluid melt and is a much better choice to transmit the underglaze colors. But I still applied G2926B on the inside of the mug on the right, it has a lower thermal expansion and is less likely to craze. 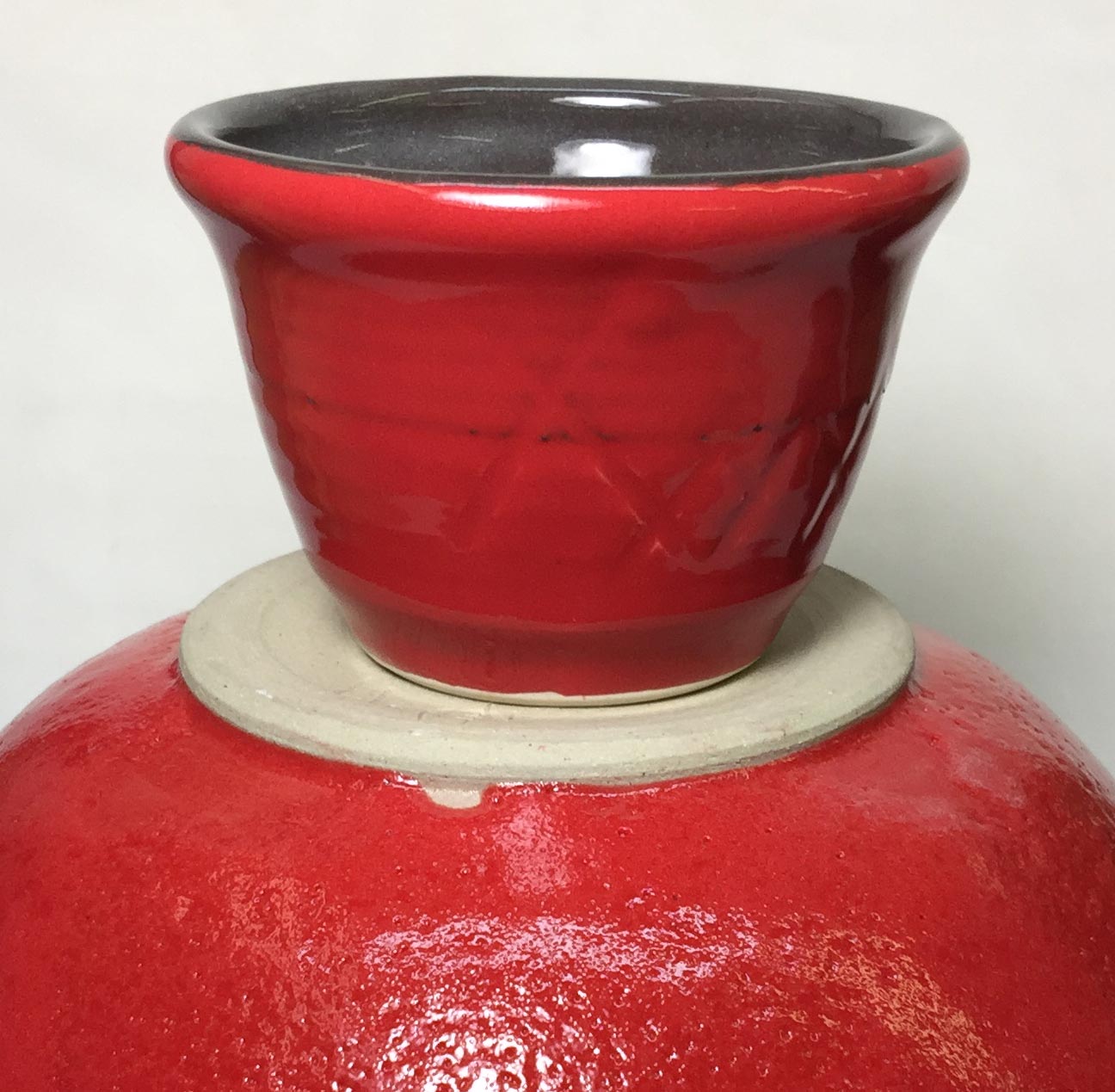 When you mix it right it will be thixotropic, that is, it will gel slightly and hold itself on the ware after dipping. This state can only be achieved if there is enough water for the epsom salts to do their magic. The watery nature of the slurry is nice for measuring specific gravity using a hydrometer (normally they don't float freely enough if the slurry is creamy). We normally recommend a specific gravity of 1.44 for this glaze, but in this case it seemed watery enough at 1.46. On use it will become clear if 1.46 is OK. How? It will go on the ware too thick. If that happens just add water to 1.44 and add more epson salts to gel it back up.

Black and white cone 6 brushing glazes were easy to make 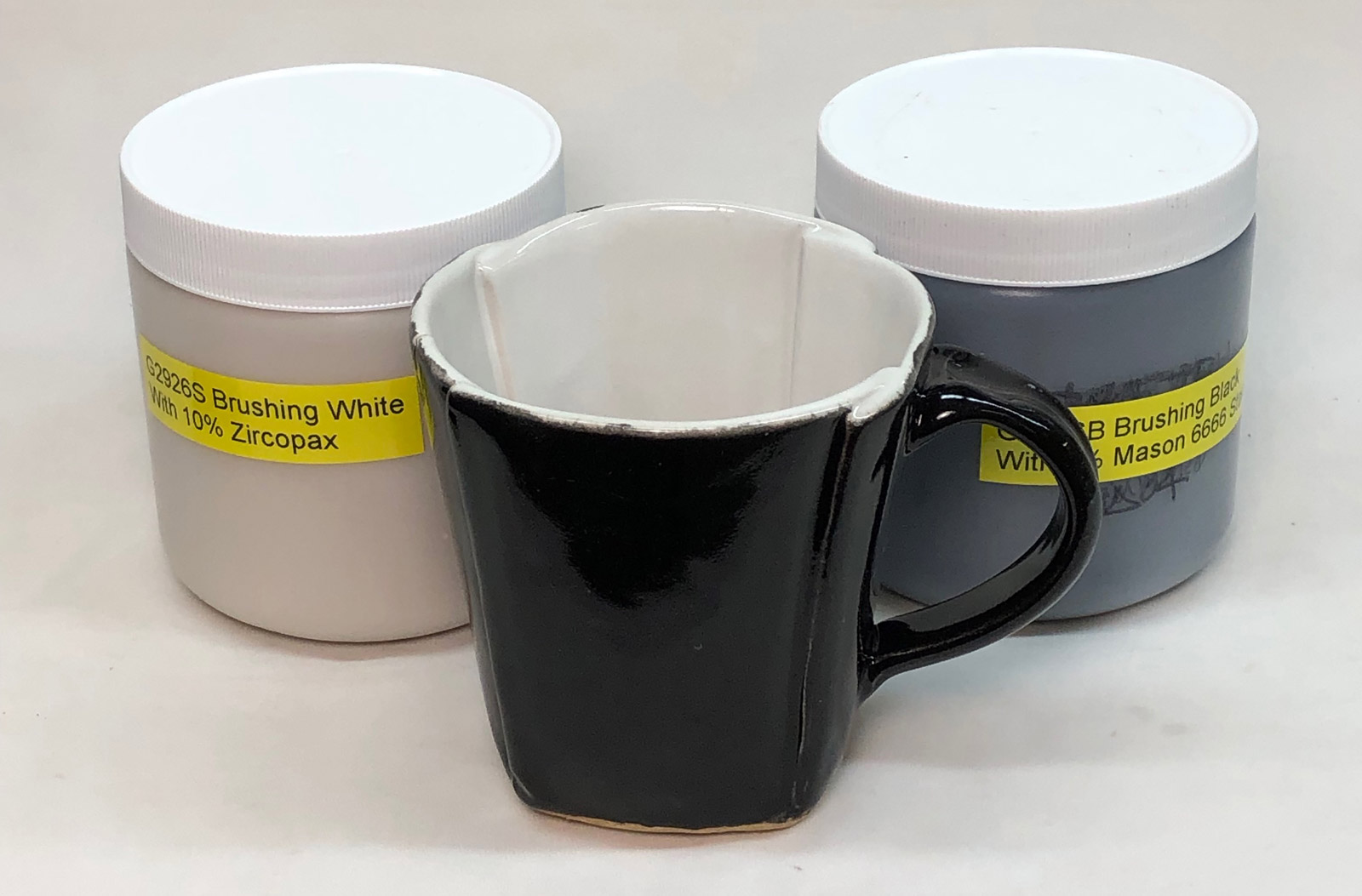 We started by adding 500 grams of the G2926B Whiteware base clear to 250g of water and 100g of Laguna gum solution. It was possible to stir all the powder in without a mixer. There were a few lumps left but they broke down overnight (yielding about 550 ml at 1.58 specific gravity). For the black we added 30g more of Mason 6666 stain (6%) and for white 50g of zircopax (10%). This increased the specific gravity to 1.63, higher than pretty well any commercial brushing glaze (if needed, there is plenty of room to add water to thin it for better application properties). The black recipe costs about 1.37 cents/ml for us to make (compared to Amaco C-1 Obsidian @ 3.92 cents/ml to buy). But the situation gets even better: If we were to add enough water to bring the specific gravity down to the 1.4 of C-1 there would be far more than 550ml.