This is an "MgO matte". High MgO content is a common matting mechanism at cone 10 but also works at cone 6. This recipe has the same chemistry as G2934, however it sources the MgO from a frit and talc rather than from dolomite. The frit has a predictable chemistry, produces a much lower LOI (3.8 vs. 13.6), a smoother fired surface and better melt fluidity to host stains (stains look fantastic in this base).

WARNING: Like the original, the degree-of-matteness is very dependent on cooling rate. Fast cooling (e.g. free-fall in a lightly-loaded or smaller kiln) produces a silky matte surface. Slower cooling (e.g. a heavily loaded kiln) produces a matter and drier surface (subject to cutlery marking). Test in your circumstances to decide whether to adjust your firing to accommodate this or blend in some glossy G2926B produce the silky surface.

Fusion Frit F-69 can be used instead of Ferro Frit 3249 (actually, it is better). This recipe employs a mix of calcined and raw kaolin to keep the drying shrinkage down (to avoid cracking on drying). If you use pure kaolin it will likely crack during drying. If you do not have calcined kaolin just make your own (bisque fire a container of powder).

This glaze has a very low thermal expansion and will not craze an any common clay body. It accepts stains exceptionally well.

We recommend doing cutlery marking tests on your ware. If they mark, blend in a little transparent glossy glaze (like G2926B). This will compromise the matteness a little but will reduce the marking.

Again, although matte in appearance, this glaze has a high melt fluidity. That means that brush-on colors could bleed.

Because this contains both calcined and raw kaolins you can adjust their ratios to control the compromise between dry hardness and drying shrinkage. If better gelling response to Epsom salts (or other flocculant) is needed trade one or two percent raw kaolin for bentonite (to increase the particle surface area). 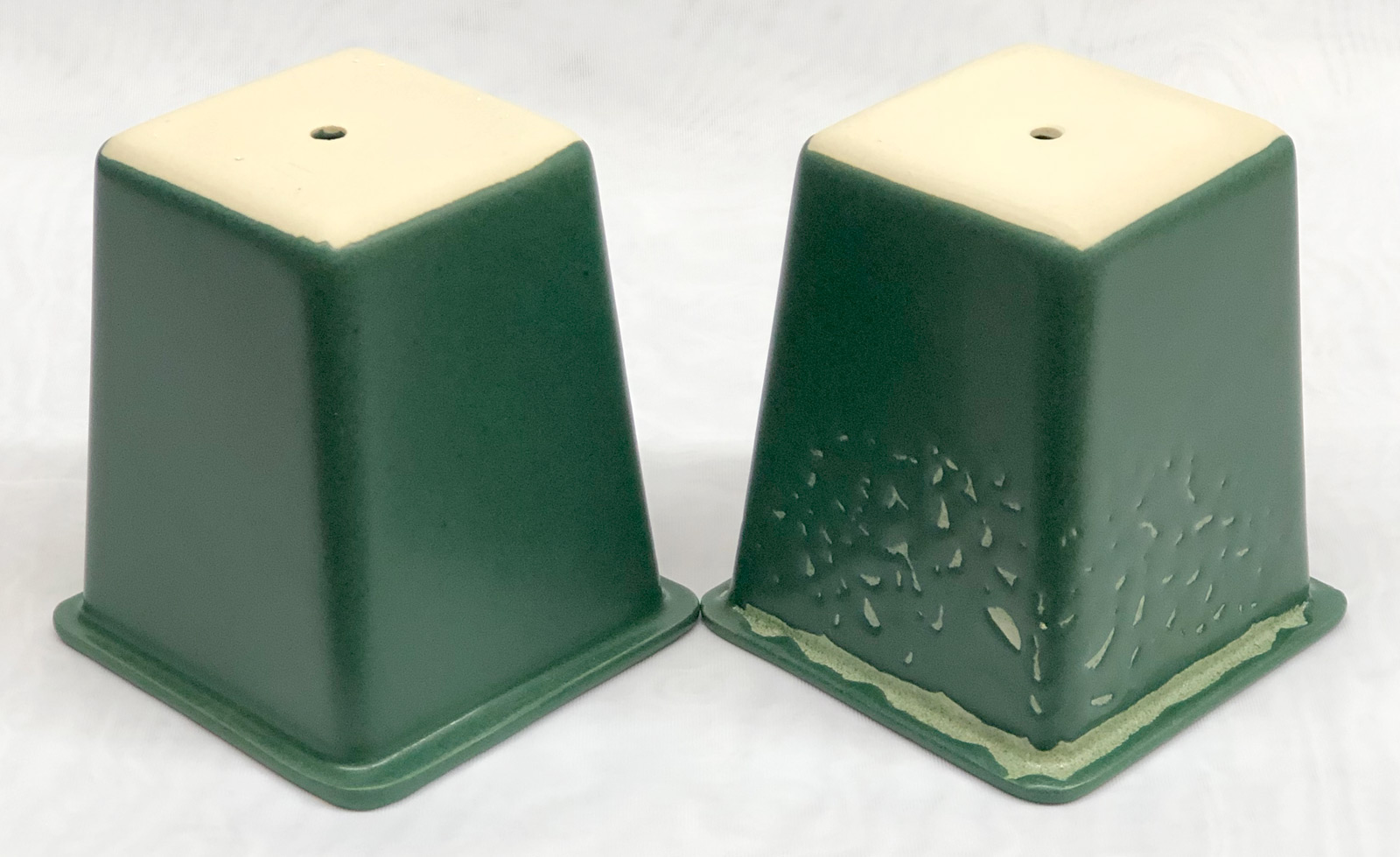 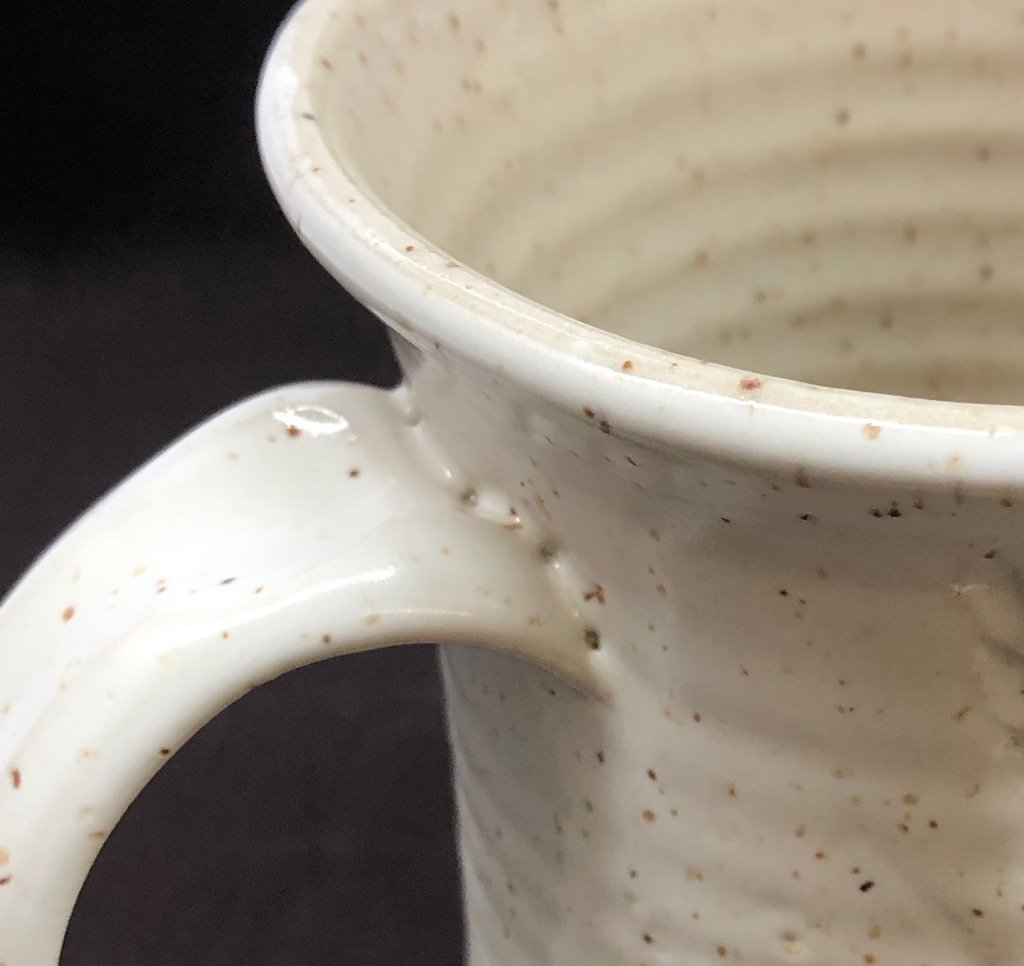 G2934Y is a fabulous base glaze but it is not without issues. It has significant clay content in the recipe and high levels of Al2O3 in the chemistry, these make it susceptible to crawling. While it is normally fine as is, when you add certain stains to color it (especially at significant percentages) or opacify it using zircon (this has 10%), it can become more susceptible to crawling. On this mug, the glaze layer thickens at the recess of the handle join, that produces crawling during firing. This happens, both because the glaze cracked here during drying and because the zircon stiffens the melt, making it less mobile. To solve this issue one could use a mix of tin oxide and zircon (tin does not stiffen the melt, try 4% tin, 6% zircon, for example). Or, calcine more of the kaolin in the recipe (to reduce drying shrinkage).

The glorious colors of G2934Y glaze

These are made from Plainsman M370 casting and fired to cone 6 using the PLC6DS firing schedule. There is a caution with thin cast ware: If walls are not thick enough to provide the porosity to be able to absorb all the water from the glaze, then the slow-drying glaze could crack and produce crawling during firing. Thinner pieces (not shown) did crawl in this firing. 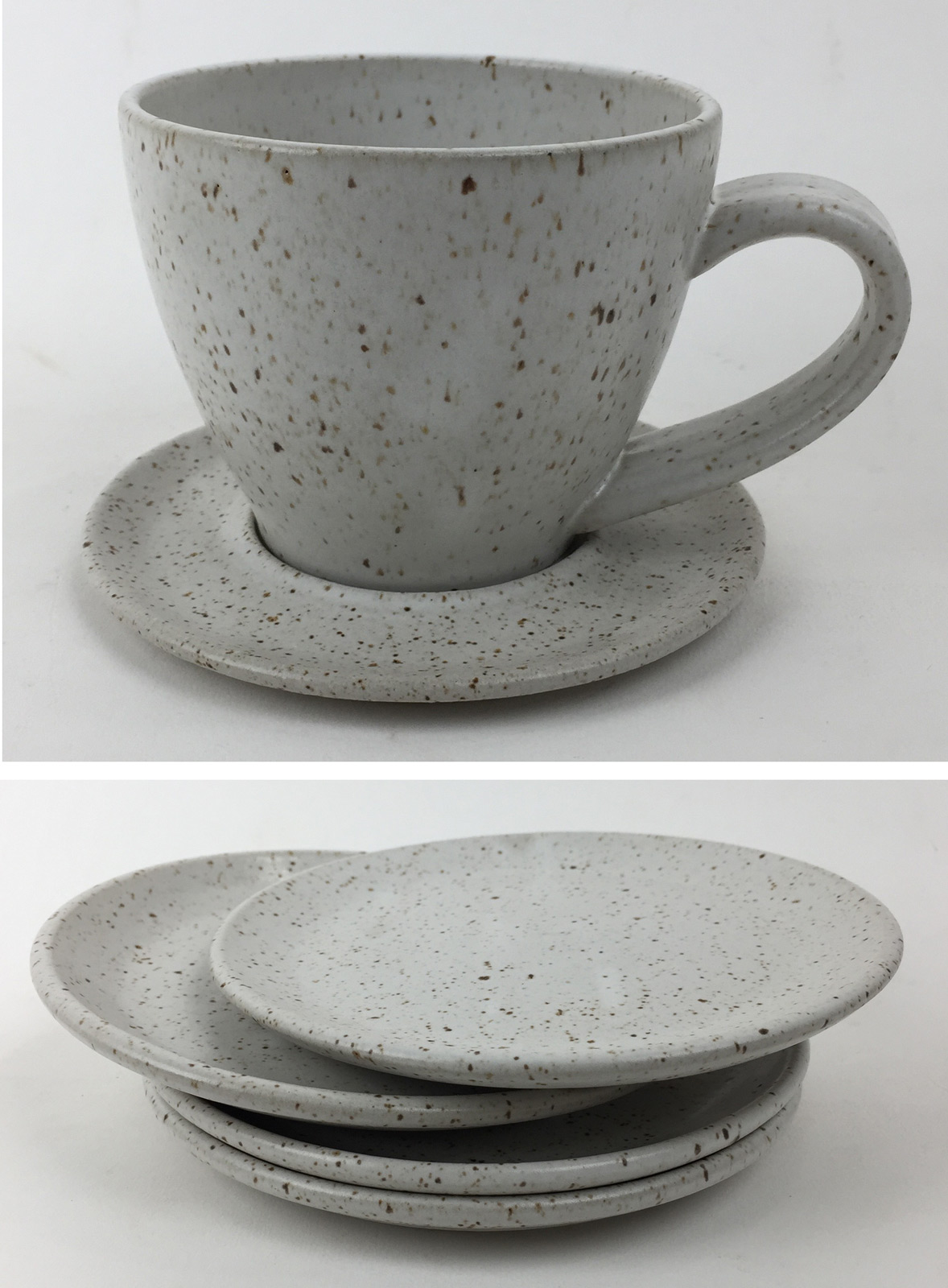 Produces an appearance very similar to dolomite-matte-glazed ware fired in cone 10 reduction. The effect would be similar using speckled bodies made by other manufacturers. Pieces made by Tom Friedman. 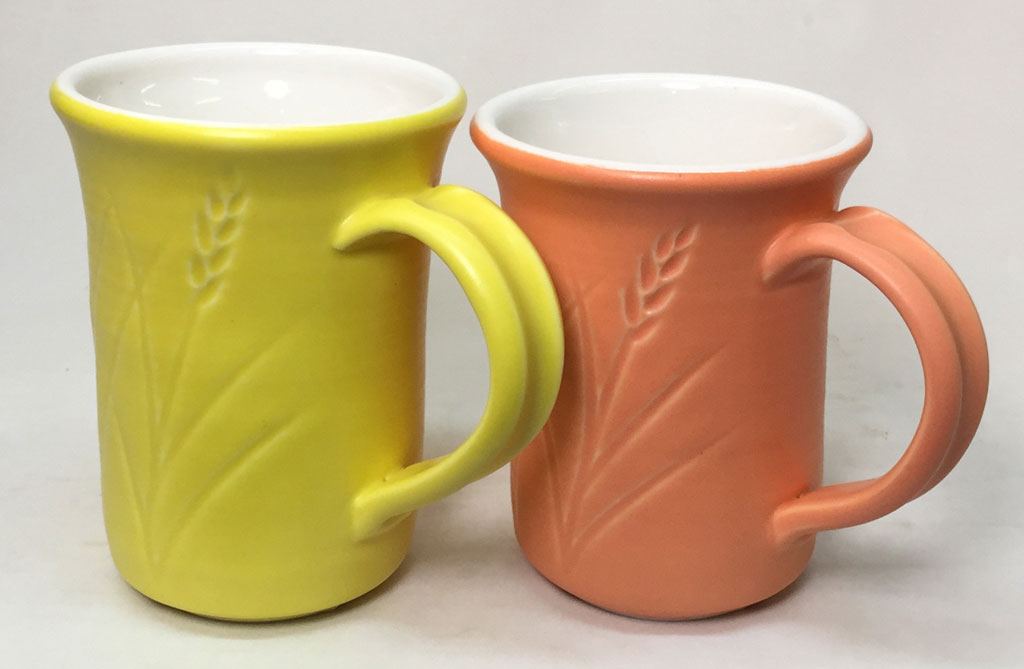 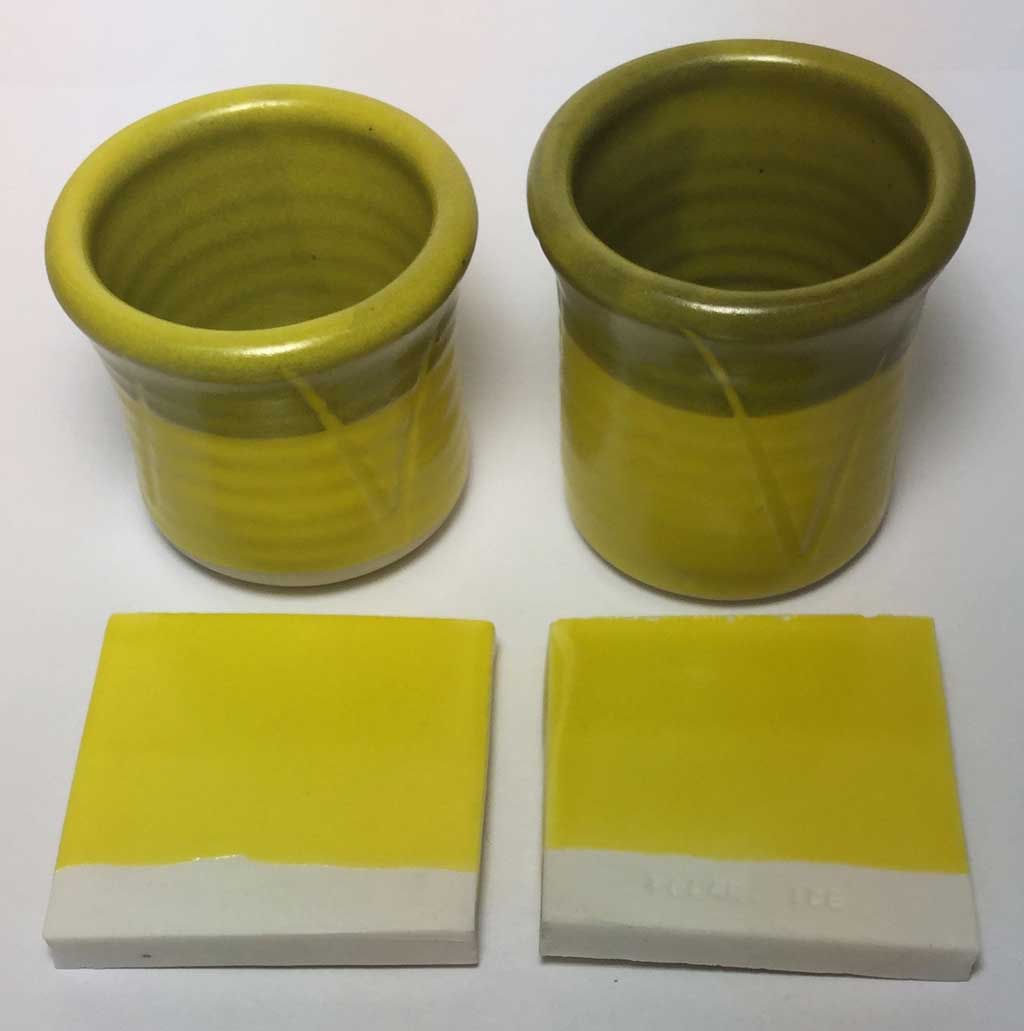 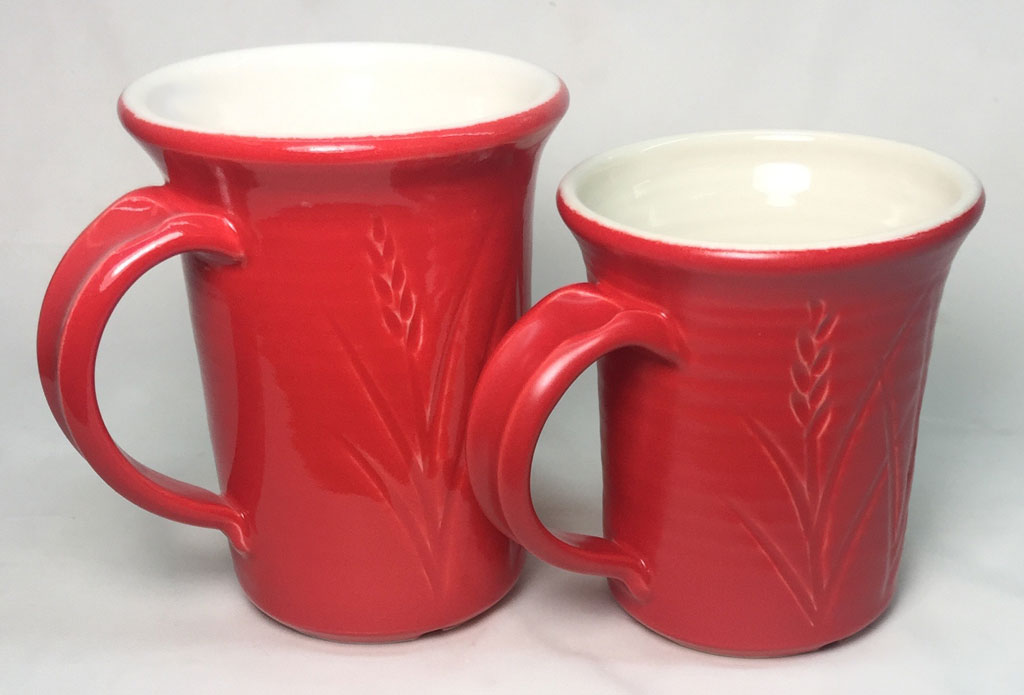 Mugs hand-built by Tony Hansen. This base glaze is an adjustment to the original G2934 matte. It employs a frit to source the MgO instead of dolomite. The result is a glaze that melts and flows very well, yet is matte. And it is a great host for a wide range of stains, they look better in this than in a glossy base. The only color that has not worked well so far is purple. 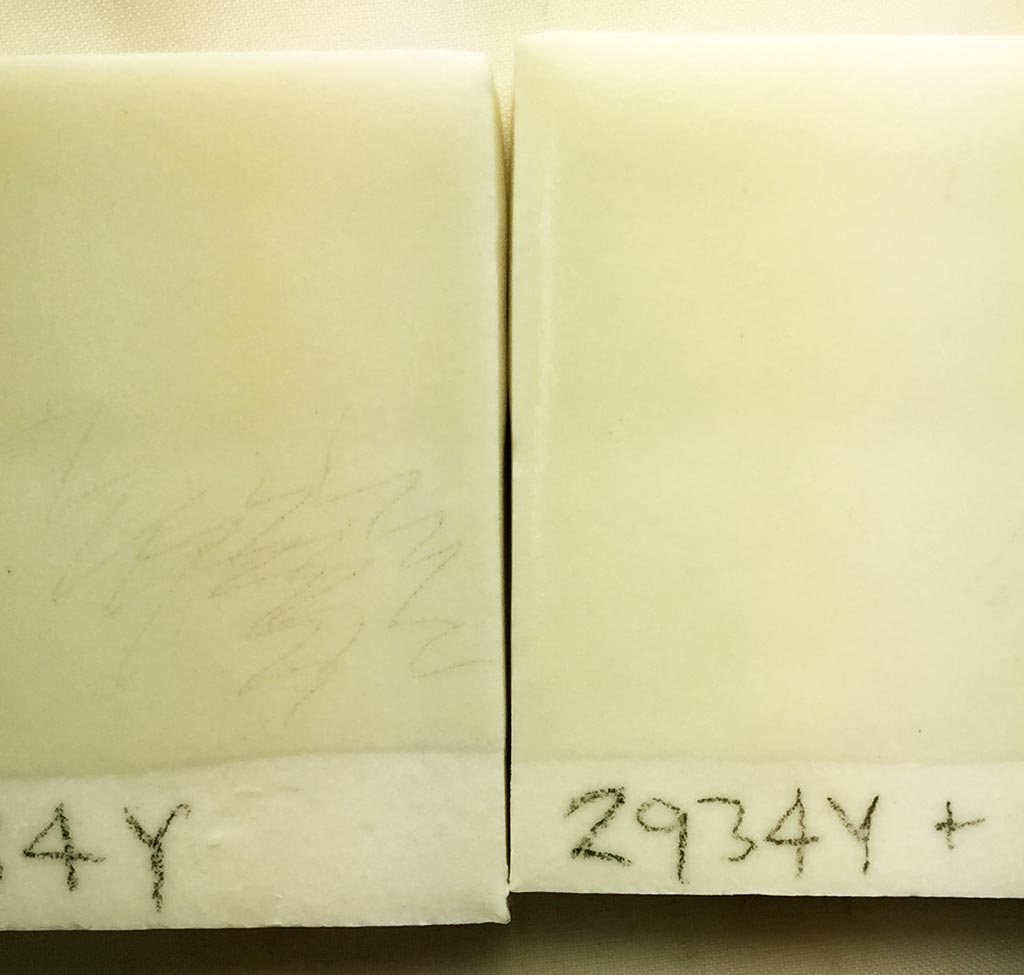 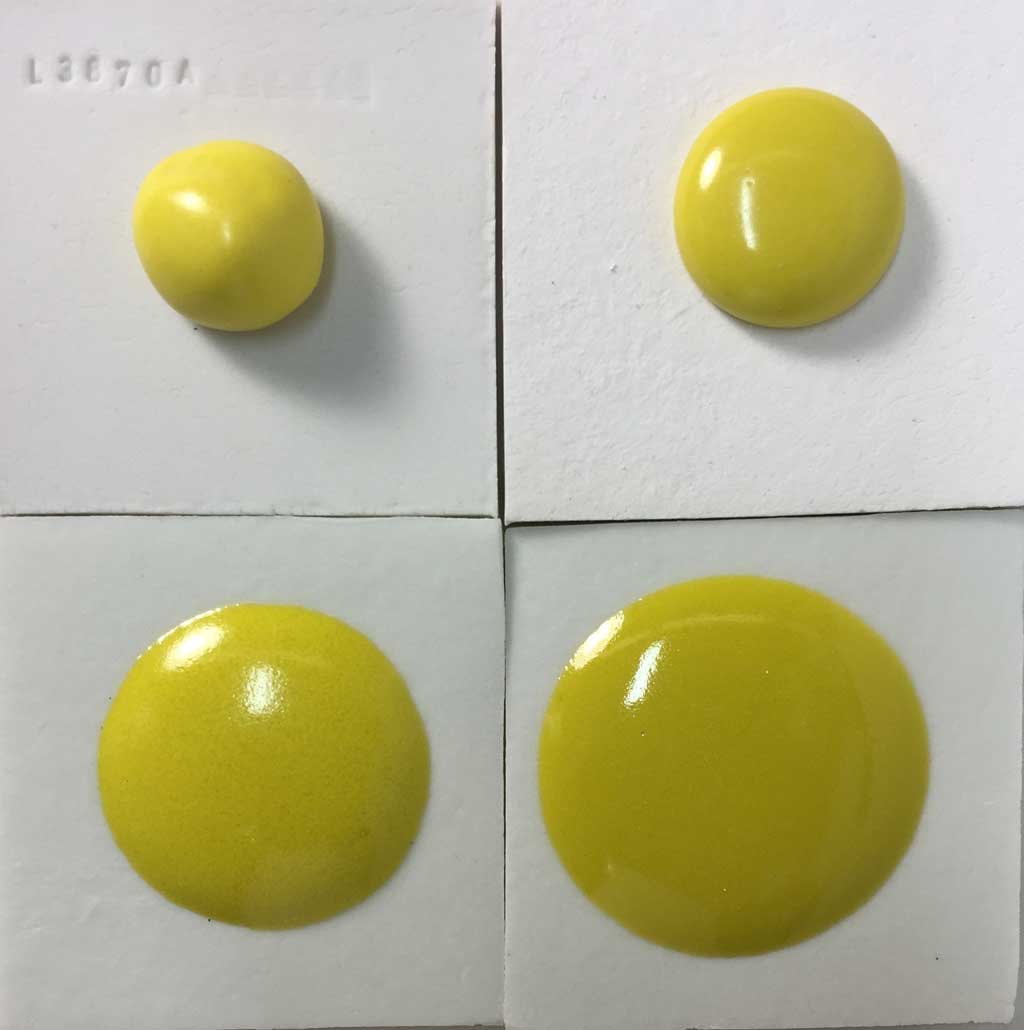 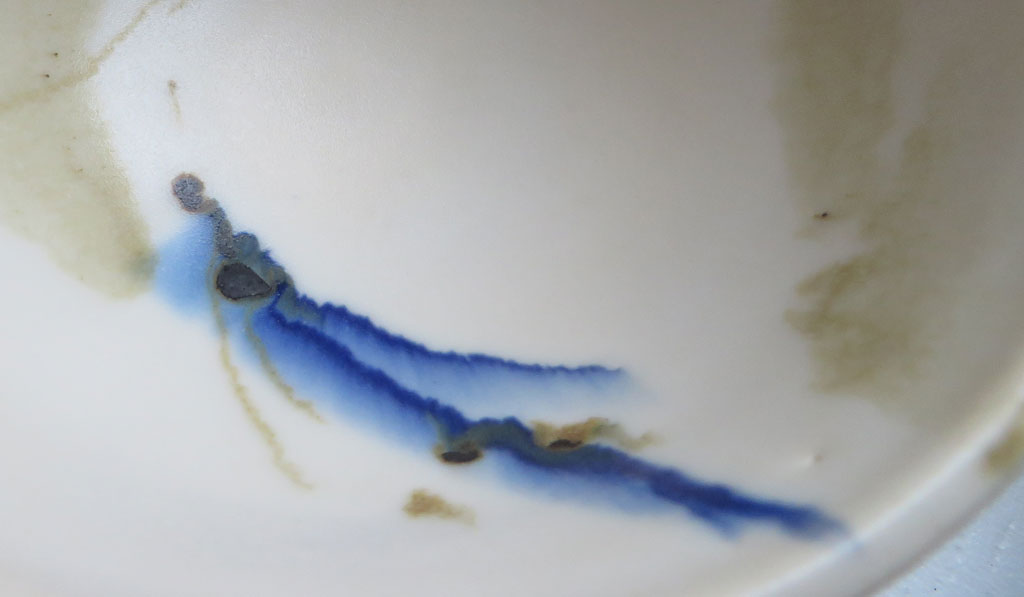 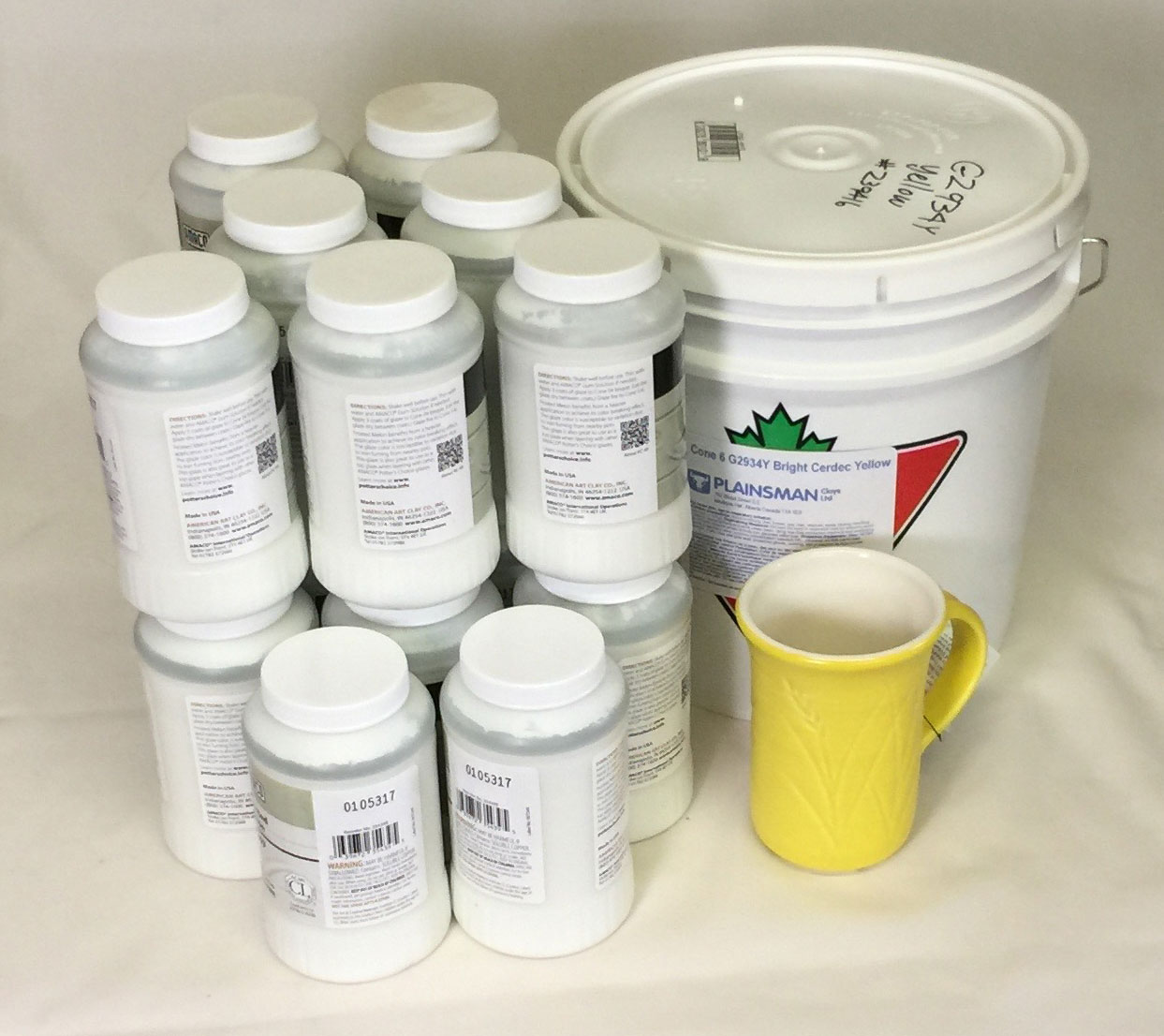 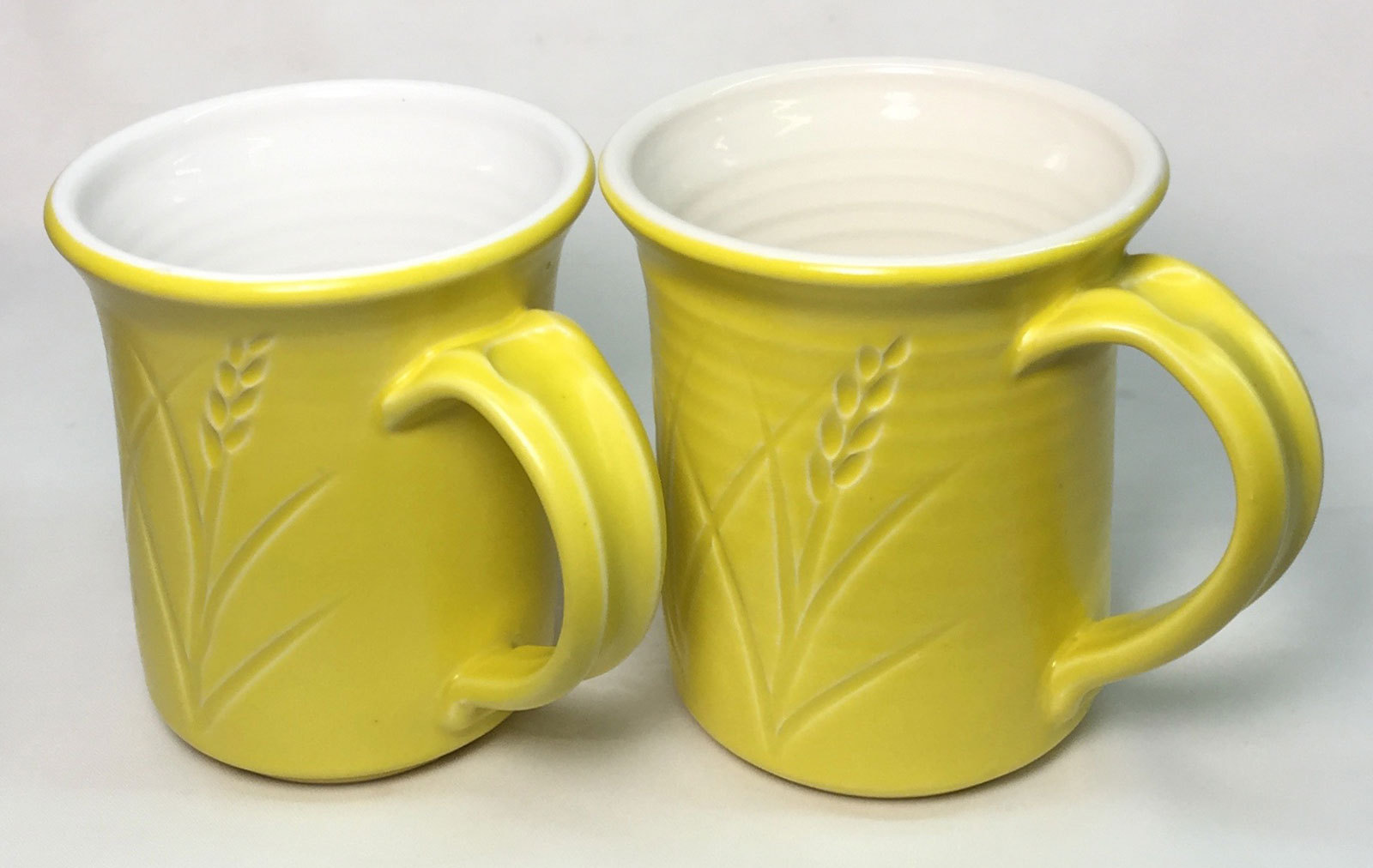 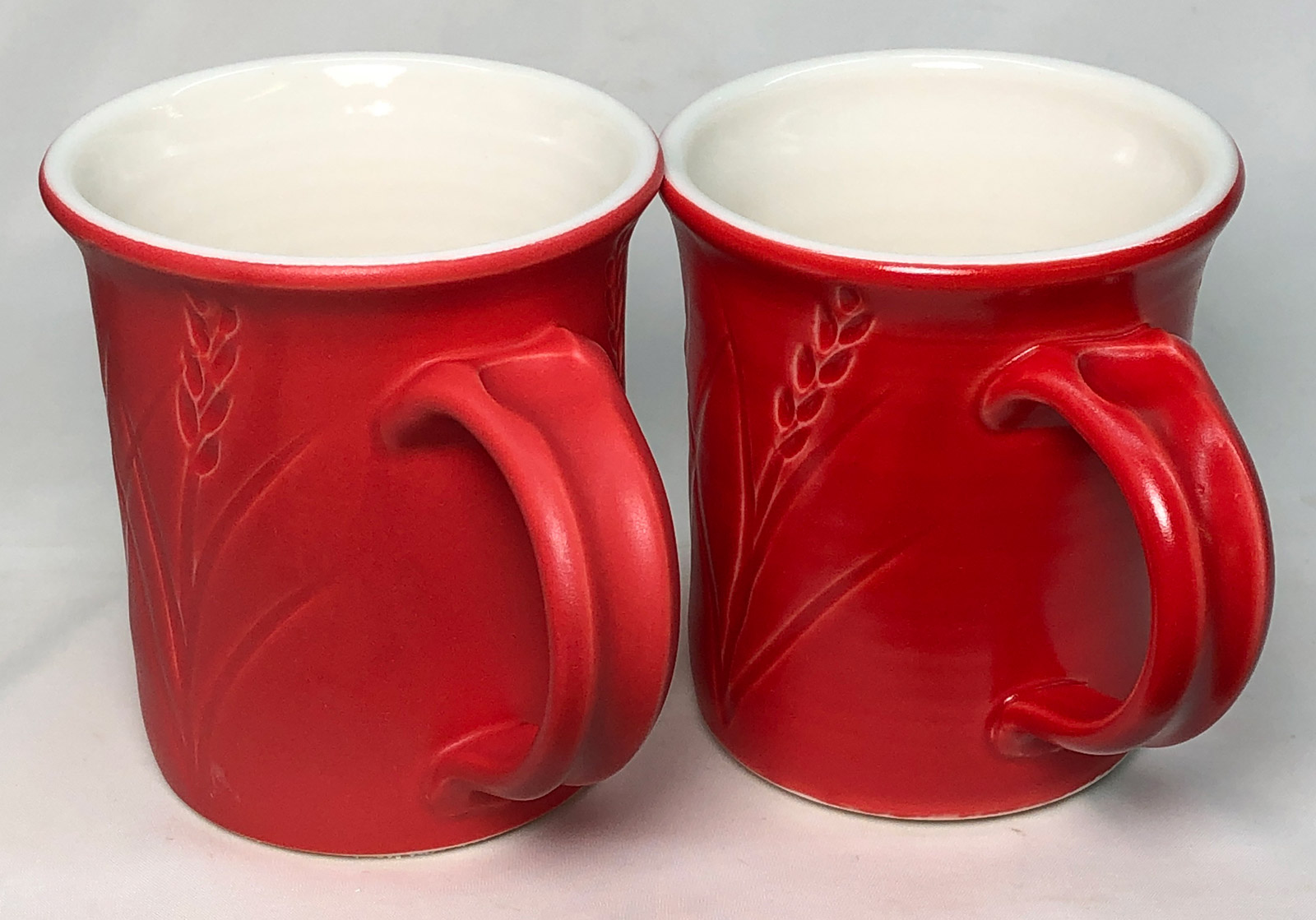 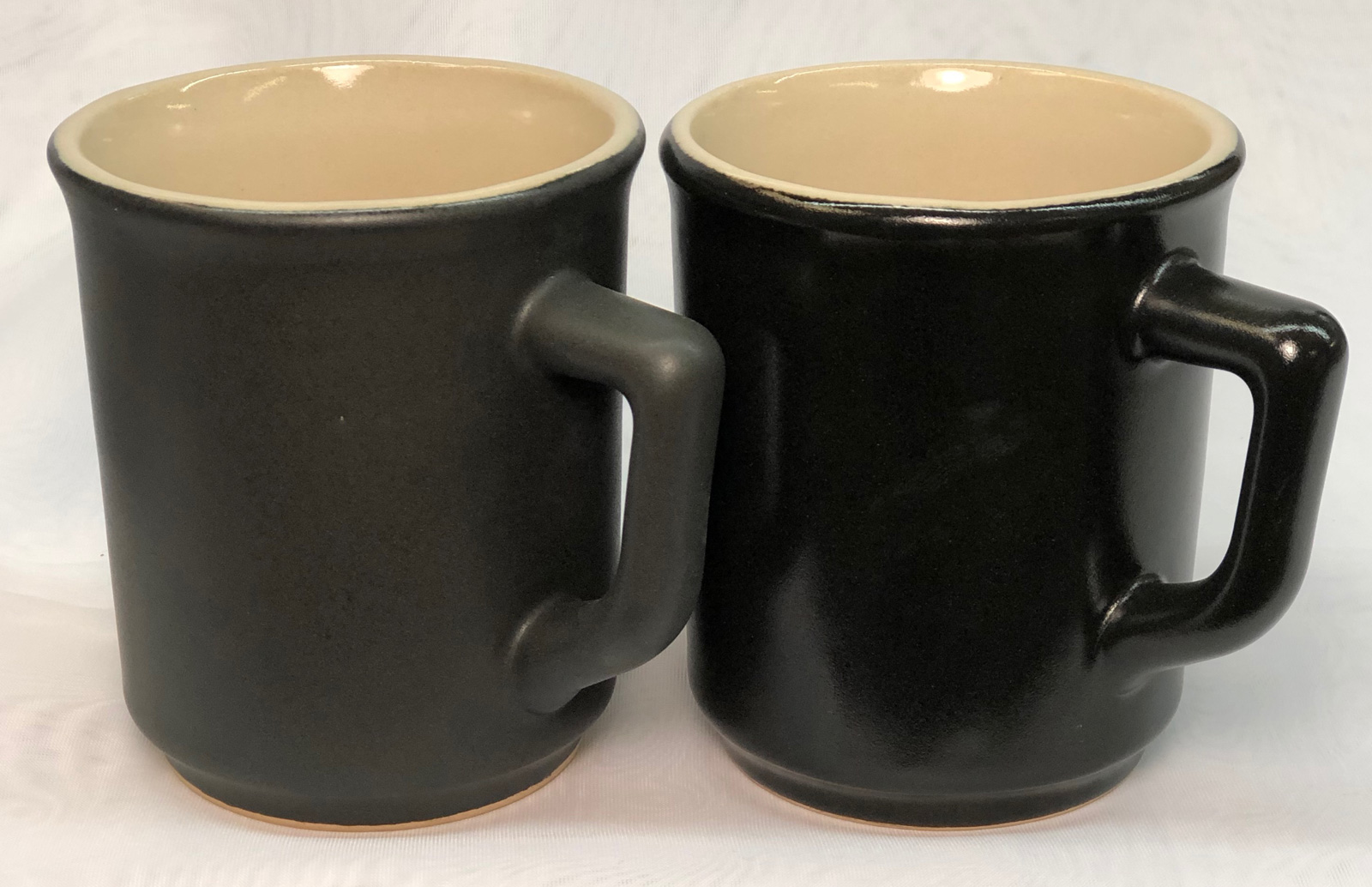 This is G2934Y satin matte with Mason 6600 black stain. The piece on the left was fired using a slow-cool firing schedule (C6DHSC). The schedule for the one on the right turned the kiln off at 2100F (after a half hour drop-from-2200F-and-hold), then it free-fell. The slow cool gives the glaze on the left time to crystallize, thus it is no longer a satin matte. It is interesting that to this mix of the glaze I added 20% glossy clear, yet it still matted on the slow cool. 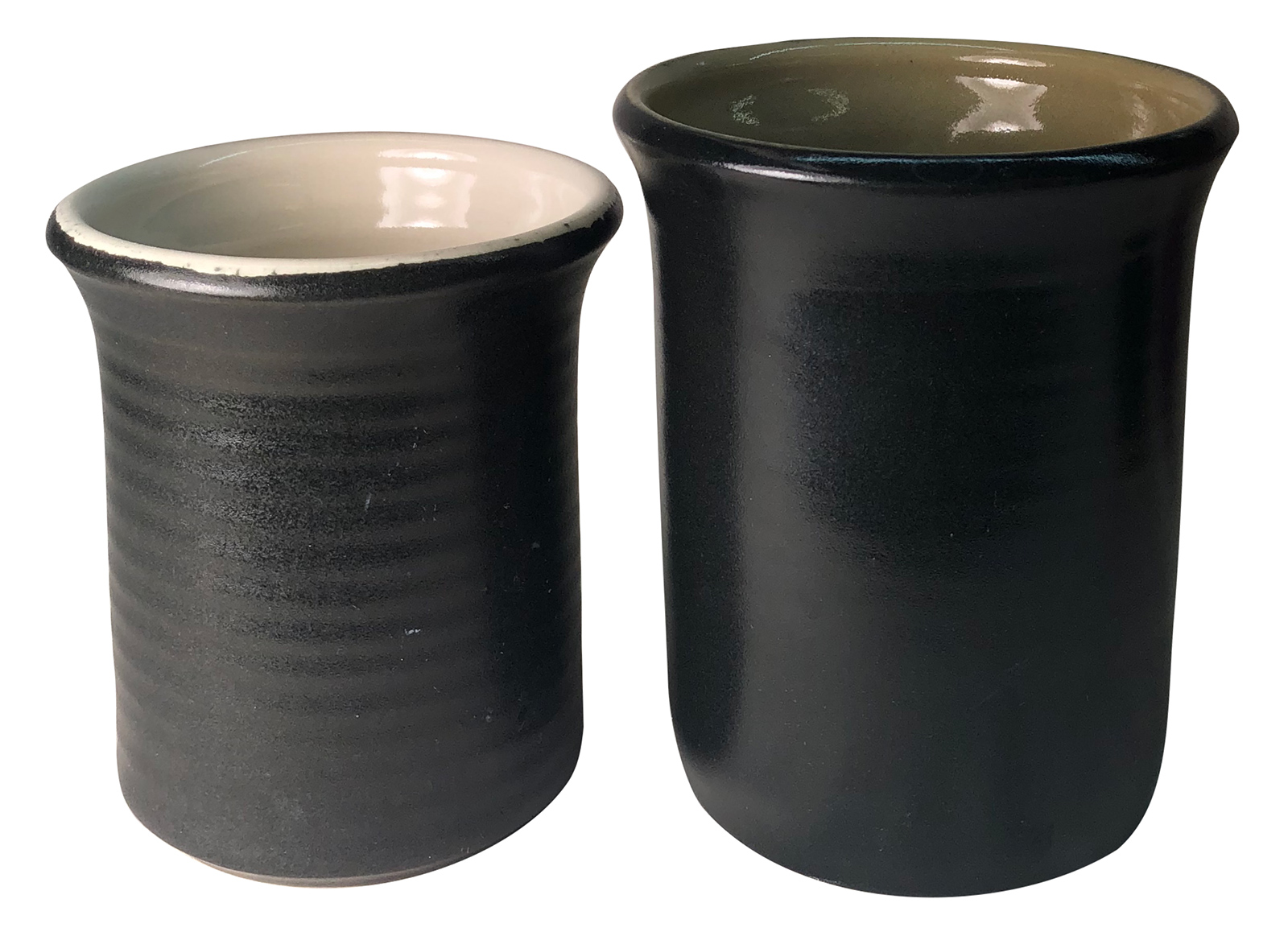 This contains 6% Mason 6600 black stain (Mason 6666 gives dark brown, don't use it). The base recipe, G2934, is an excellent balanced-chemistry host for a wide range of stains to produce equally stunning reds, yellows, oranges, etc. The fritted version of the recipe, G2934Y, provides an even better host. This glaze is affected by the clay it is on. The body on the right is highly vitreous, this has produced a finer texture that glistens in the light. The body on the left is a whiteware having 1% porosity (Plainsman M370). Firing schedule is also a factor, slower cooling will dull the color more. We use the PLC6DS firing schedule.