Reliable widely used base glaze for cone 10 porcelains and whitewares. The original recipe was developed from a glaze used for porcelain insulators.

This is is long-time cone 10 transparent base, it is used by many potters around the world. It was originally employed as a high temperature porcelain insulator glaze on a 25-Porcelain body. It used calcium carbonate to supply the CaO but we converted it to using Wollastonite instead (to reduce surface imperfections and avoid the variations inherent with different supplies of calcium carbonate). Unlike many transparent glazes in use by potters today, this one has a low amount of feldspar to keep the thermal expansion down (and therefore avoid crazing). This glaze also has the correct amount of kaolin, not too high to cause cracking during drying, and no so low that it settles out in the bucket.

This recipe is also a good base from which to make a range of different colors and effects (by adding oxides, stains, opacifiers and variegators). The small amount of zinc present is here to get melting started early, it volatilizes at high temperatures. If you are doing fast firing, consider leaving it out (fast fire glazes need to melt as late as possible).

For porcelains, use Grolleg Kaolin instead of EPK, the glaze surface will fire bluer and look better. However Grolleg does not suspend it quite as well as EPK, so you may need to add 1% bentonite (or better yet 0.25-0.5% Veegum, it is cleaner). You might also consider switching to a cleaner soda feldspar (or nepheline syenite) to get better melting and an even more brilliant surface (however you may need to adjust it if crazing occurs).

If you have crazing issues, it is easy to adjust this recipe to lower its thermal expansion (using Digitalfire Insight or your account at Insight-live.com).

The firing schedule is just an example, this will likely work fine with yours. This is a base recipe that was originally used for electrical insulators on a 25% porcelain recipe. Since most porcelains and whitewares used in high fire ceramics have this same type of formulation, this glaze recipe has proven to work well. It is not highly fluid, so if refractory colorants are added extra flux may be needed. 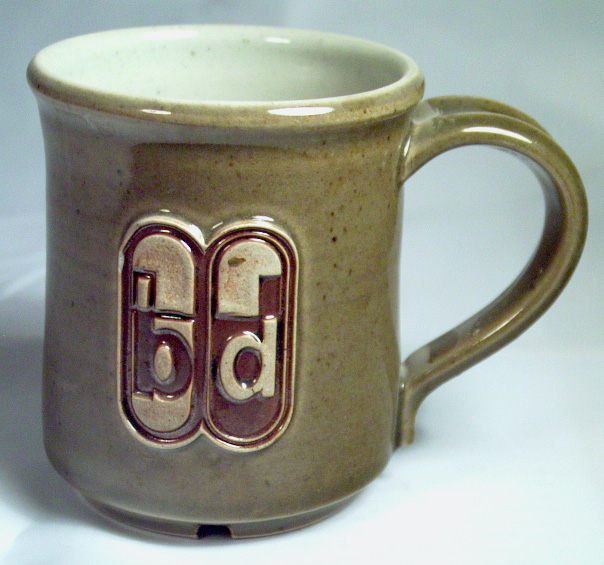 Polymer plates are used in letter press and can still be purchased online (e.g. boxcarpress.com). Just create the artwork in a vector graphic drawing program and upload it to their website. Press it into a thin slab (using some sort of oil as a parting agent) and then attach that using slip to the item. After the piece is bisque fired apply the color and wipe it away from the high spots using a sponge. This is a celadon cone 10R glaze (about 3.5% iron oxide) on a buff firing reduction stoneware with G1947U transparent liner glaze. The brown in the logo is a tenmoku. 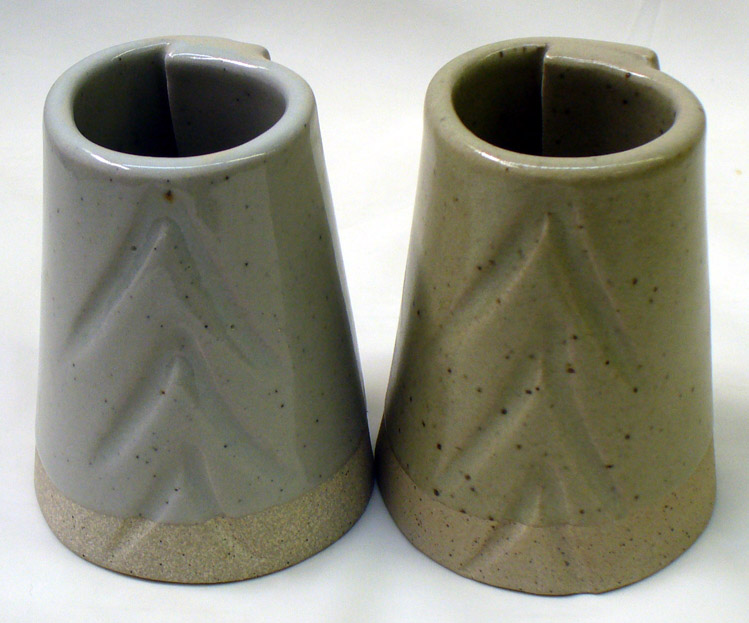 Ravenscrag Slip is not ultra glossy but has a silky surface. It also contains some iron oxide and this colors the glaze somewhat. But the surface is much less sterile and pleasant to touch.

Does Grolleg whiten a glaze the same as it does a body? 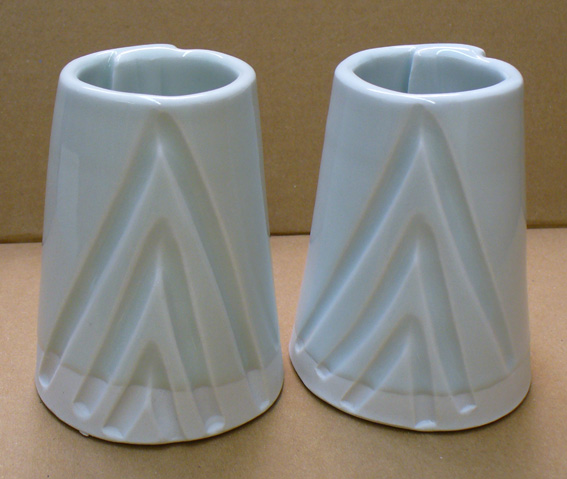 Yes. The two specimens are both the same Grolleg-based porcelains. Both of them are glazed with the same glaze: 1947U transparent. But the glaze on the left is using EP Kaolin and the one on the right Grolleg kaolin. The Grolleg glaze is dramatically better, the color has a bluish cast that is more attractive. The Grolleg does not suspend the slurry as well, however it responds well to gelling (using vinegar, for example) more than compensating to create an easy-to-use suspension. 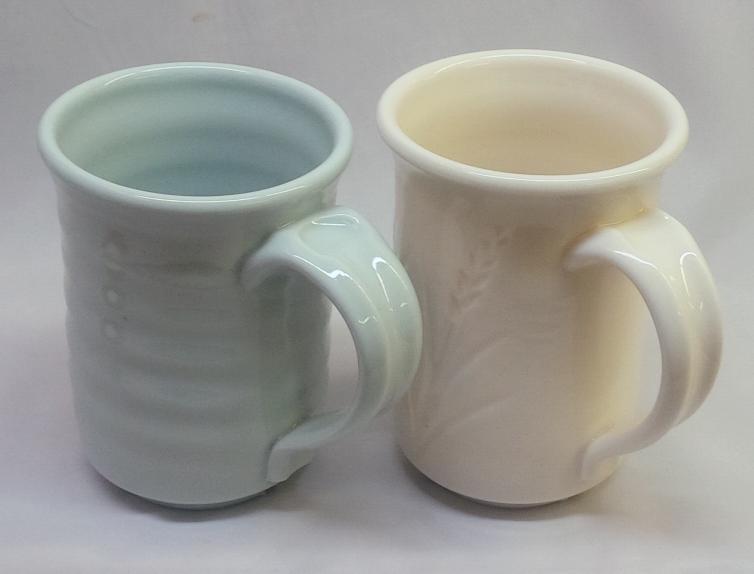 Sterile white vs. pure Ravenscrag Slip as a liner glaze at cone 10R 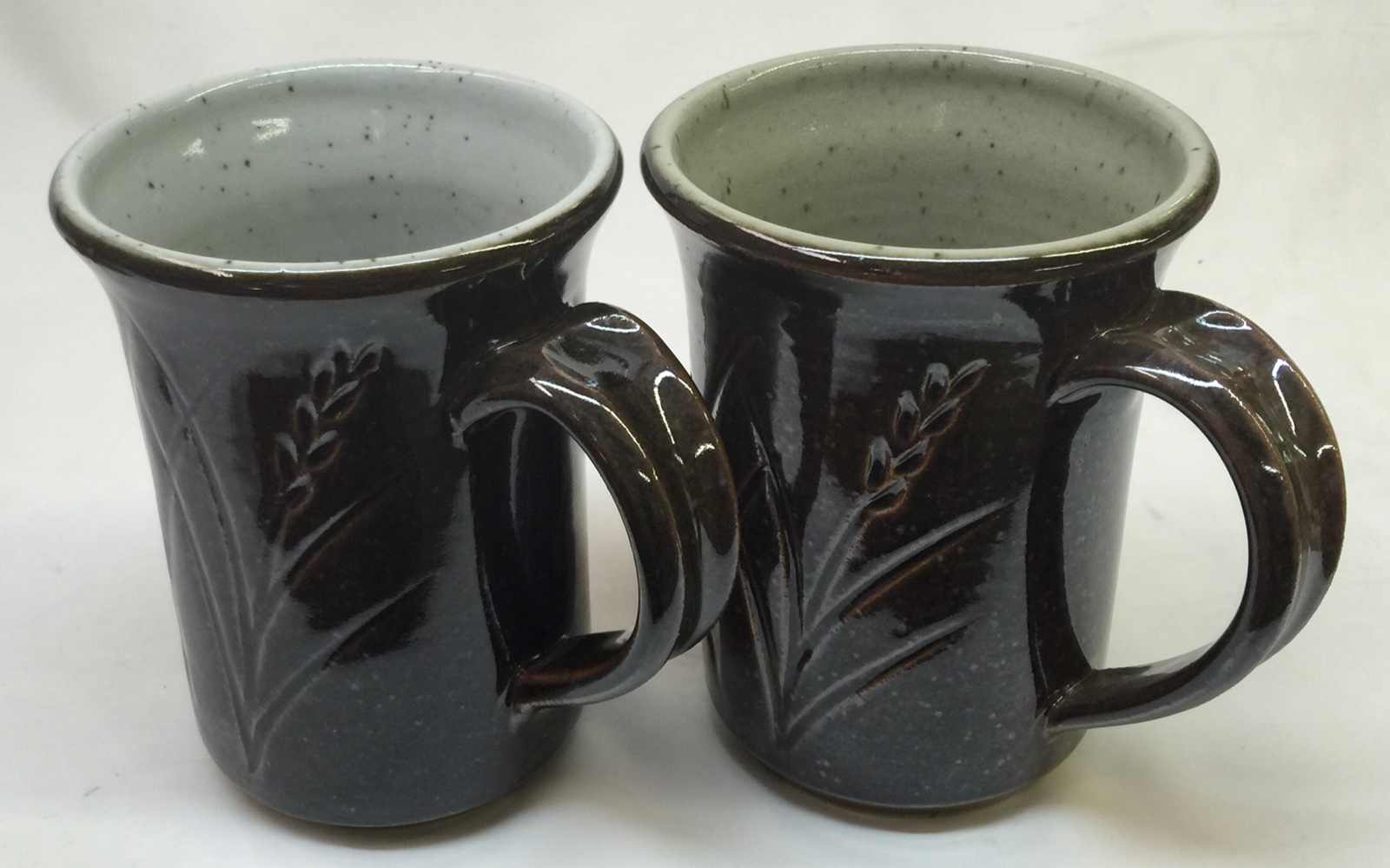 This picture does not fully convey how much better the Ravenscrag is as a liner (vs. G1947U). It has depth and looks much richer. It course, it could be opacified somewhat to be whiter and would still retain the surface quality (as long is it is not too opaque). The body is Plainsman H450. The outside glaze is pure Alberta Slip. 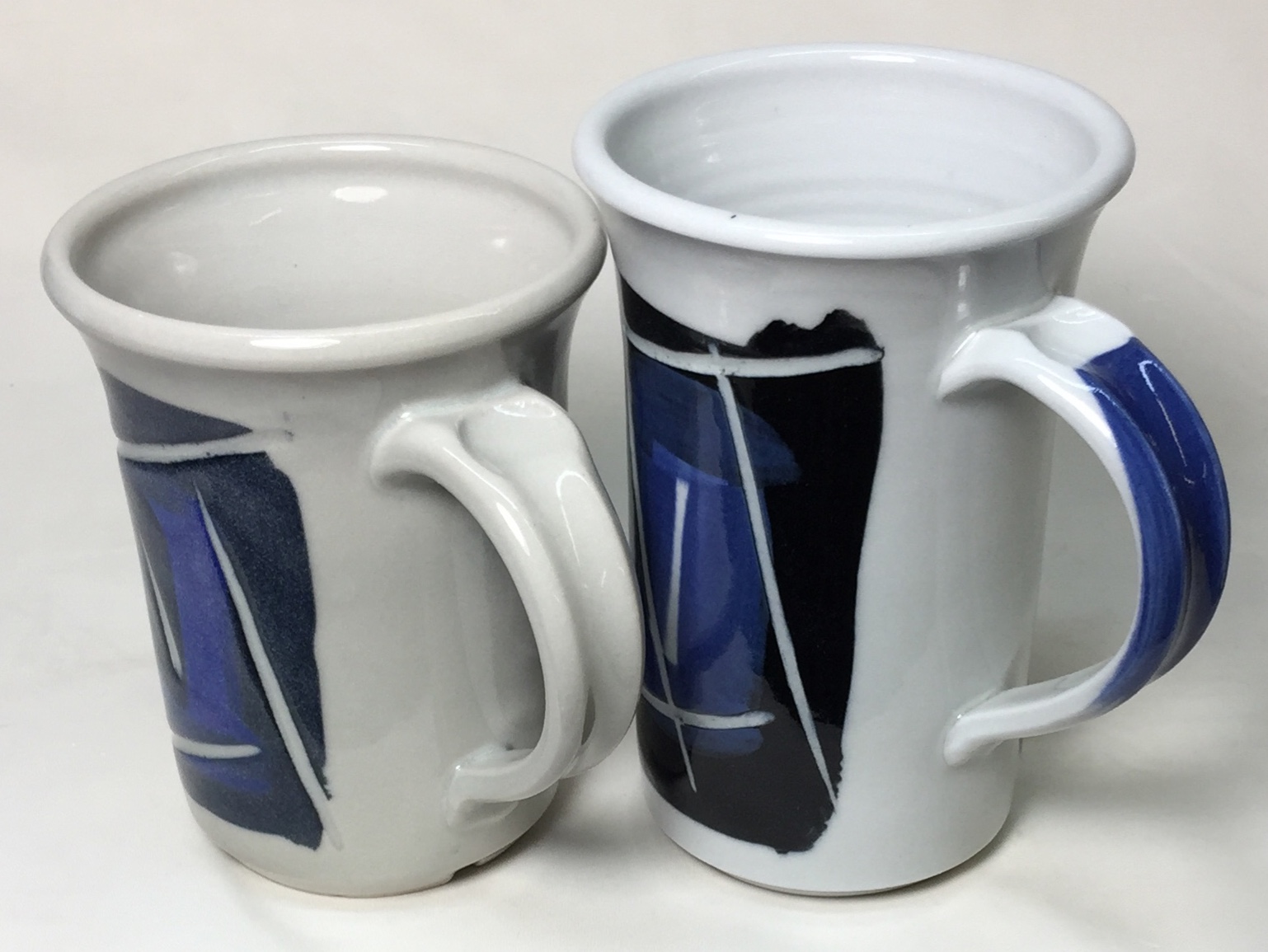 Want to make this incredible porcelain and glaze yourself? Read on. The mug on the left is a cone 10R (2350F/1290C) porcelain (#6 Tile kaolin and Nepheline Syenite) with G1947U clear glaze. The other is a fritted cone 03 (1950F or 1065C) porcelain (NZ Kaolin, Ferro Frit 3110) with G2931K clear glaze. We call the body/glaze/firing system "Zero3" (google it or use the links here). The Zero3 porcelain is blue-white instead of grey, the glaze is crystal clear, underglaze colors are so much more vibrant. The Zero3 mug was fired in 3 hours (cold-to-cold). It also withstands thermal shock better, it is as strong or stronger and much more translucent. How is this possible? The magic of the frit, it melts so much better than nepheline. The recipes and method are linked here. It is the most expensive body you will ever make. But from it you will create the highest quality ware you have ever made using the most plastic body you have ever thrown! Follow the instructions carefully.