-Together with CaO, SrO, and MgO it is considered one of the alkaline earth GROUP of oxides. It has a cubic crystal structure.

-Baria is the heaviest of the divalent fluxing oxides.

-Barium gives unique color responses with certain oxides (e.g. with copper it will give a marked blue compared to glazes fluxed with MgO, SrO).

-BaO often contributes a high index of refraction and this can enhance in-glaze colors.

-As a flux it can be very active in small amounts (not active at low temperatures). For example, it can improve gloss, elasticity, mechanical strength and corrosion resistance, and acid resistance.

-Barium imparts properties to glazes that fall between calcia/magnesia and lead (it tends to produce a denser, more brilliant but less durable product than calcia). Barium does not reduce in the melt and therefore does not discolor. It acts as a flux (if decomposed) and can assist in the formation of a matte structure. Barium forms silicates slowly, but when completely combined it is very active as a fluxing agent.

-Baria is more effective as a melter when associated with other fluxing oxides with which it can combine (e.g. if fused in certain frit formulations it can react readily in even low temperature glazes). It is known, for example, to form a strong eutectic with B2O3 to produce glossy and runny glazes that can solidify below 500C).

-In larger amounts it becomes refractory and can produce dangerous leachable glazes, since it does not fully combine to form insoluble silicates. It is common to see art glazes with more than 20% barium carbonate, and at times, even 40-50% recipes are traded in the pottery community. These are almost certainly leachable.

-Use with caution in functional ware! There is considerable controversy concerning the safety of barium in glazes (i.e. if you see larger amounts of barium in glazes labeled 'Dry Matte' or 'Stony Matt', be very cautious). Like lead, it can be leached FROM the surface (of improperly fired or formulated glazes) by acidic foods or liquids. Government agencies have the power to levy fines if glaze is found to be soluble.

-If possible, determine the reason for BaO in the recipe. The mechanism may well be better accomplished by another oxide. For example, SrO and CaO can both be employed to produce crystal mattes in saturation (although a calcium matte will likely be coarser). K2O may produce a better blue with copper or a brighter color.

-SrO has been promoted as a glaze substitute for BaO and in some cases this is true. It has a lower disassociation temperature and reacts earlier and is potentially able to produce a more perfect surface (unmarred by the bubbles and pits associated with higher temperature decomposition). Still it is best to substitute BaO on a 'mechanism' basis, that is, understand why it is there and choosing the best alternate oxide based on that. In some cases, even CaO or MgO can be substituted.

-Used in optical glass (up to 30%),
-Used in small amounts in bottle and flat glass (.5%),
-It is in common use in glass formulations in the television tube industry.
-It can produce better translucency in porcelain bodies.
-It is used to provide maximum flux density in hard-core permanent magnets.
-In enamels its acts as a strong flux and is less expensive than lead or zinc. It does not reduce in the presence of iron high in carbon however it is sensitive to the presence of sulfur (i.e. an impurity in antimony).
-Used in pressed glass tableware it renders brilliance and finish, but detrimentally affects certain other mechanical properties.

Substituting MgO for BaO in a matte will also make a matte, right? Wrong. 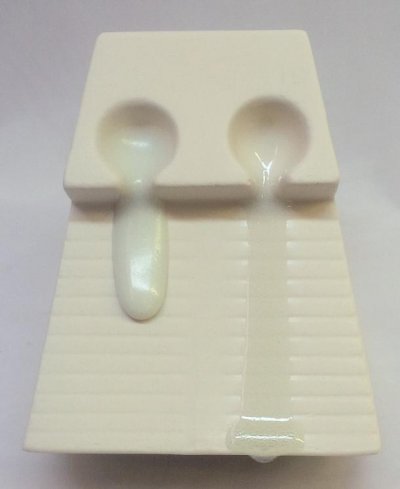 Left: G2934 magnesia cone 6 matte (sold by Plainsman Clays). Right (G2934D): The same glaze, but with 0.4 molar of BaO (from Ferro Frit CC-257) substituted for the 0.4 MgO it had. The MgO is the mechanism of the matte effect. Barium also creates mattes, but only if the chemistry of the host glaze and the temperature are right. In addition, barium mattes are normally made using the raw carbonate form, not a frit. In fritted form, barium can be a powerful flux when well dissolved in the melt and boron is present. This glaze is actually remarkably transparent. However, if this was fired lower it could very well matte.