In ceramics, glazes melt to produce a liquid glass. That glass exhibits surface tension and it is important to understand the consequences of that.

Surface tension is of concern in ceramics because the behavior of a molten glaze is affected by this phenomenon. Glazes with low surface tension spread over the body surface and shed bubbles well. Glazes with high surface tension resist spreading out, resist releasing bubbles and can crawl. Surface tension is determined by chemistry and as expected, oxides that matte and opacify glazes increase surface tension (in this approximate order MgO, Al2O3, ZrO2, ZnO, CaO, SnO2, BaO, SrO). Strong fluxes reduce it (in this order: PbO, B2O3, K2O, Na2O3, Li2O). SiO2, Fe2O3 are intermediate. ZnO is an interesting exception because it is both a strong flux and increases the surface tension.

Surface tension also relates to a serious glaze fault: blisters. Blisters happen where the molten glaze resists the breaking of bubbles at the surface, these or their unhealed remnants often survive to the fired piece. Strangely, glazes of a more fluid melt can exhibit this problem more, especially if they contain a high-surface-tension oxide like MgO. It is the surface tension and melt fluidity that enables bubbles to expand without bursting. The solution can be a slower cooling through the temperature at which the increasing temperature-induced viscosity has the power to break the film. Even better, oxides of lower surface tension can be substituted for those of higher. Or, melt fluidity can be reduced a little (often by a reduction in the B2O3). Surface tension contributes to crawling for the same reason. 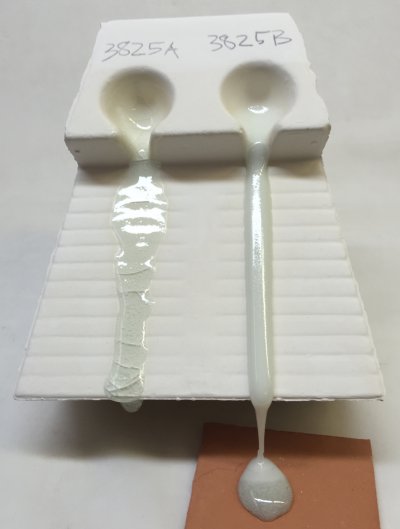 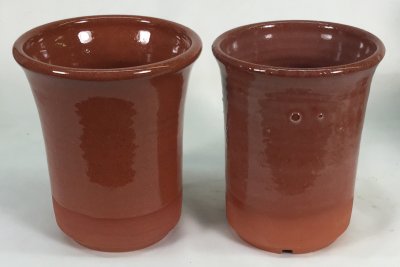 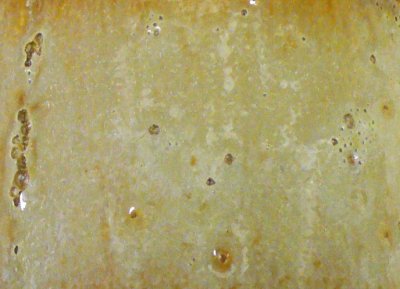 Both are low fire transparents. In a melt fluidity test they flow in a similar fashion. But here, where a 10 gram ball has melted down onto the tile, differences in surface tension are clearly evident by the angle at which the edge of the glaze meets the tile.