The raku process is an economical way of firing ware in reduction to achieve metallic and carbon effects. Normally ware is heated in a kiln until the glaze is melted to the desired degree then it is removed with tongs and put into a container of organic material (i.e. sawdust) where it is cooled. The organic material burns and uses the available oxygen in the container and the metallic effects develop. Because of the thermal shock during heat-up most people bisque fire ware before rakuing.

Raku ware is very porous and lacking in strength (because of the low temperatures employed in the process). Most raku clays are not fluxed to develop any kind of strength and low temperatures. Their weak, coarse fired character is actually needed to enable pieces to survive the heat shock of the cooling process. Raku glazes are almost always crazed. This is because high percentages of sodium are needed to melt them (sodium has the highest thermal expansion of all common oxides). The thermal shock of cooling also adds to crazing. Crazing further weakens ware to the point that it must be handled with great car, thinner pieces can easily be torn apart with ones bare hards. Thus raku ware is only suitable for decorative uses.

Metallic effects that look great out of the firing can tarnish and disappear with time and people have developed ways to preserve these with various fixatives and surface treatments. Do not buy raku ware unless this has been done.

Raku firings often generate a lot of smoke, and people have developed different ways to try to contain this smoke. Unfortunately some have developed and even promoted quite casual methods that pose significant dangers. Raku kilns can emit harmful (even dangerous) metal fumes (depending on how pots are decorated) and vapors of chlorine and sulfur (from salts, chlorides, and sulphates). Inhalation of chlorine can cause chemical pneumonia, immune reactions, rashes, irritated mucous membranes, diarrhea, nausea, vomiting, cancer, brain damage, etc. Smoke from raku is hazardous simply because ALL smoke is hazardous and possibly carcinogenic. Incomplete combustion ("yellow" smoke) produces the most hazardous substances (i.e. wood tar and thousands of other compounds). While some people claim to wear respirators with "smoke blocking filters" there is no such thing. This is why firefighters wear tanks of compressed air.

We do not deal with this process since it falls outside the realm of functionality, predictability and control that we normally advocate. However, one principle does apply: Rather than have different glaze recipes for every effect, find one clear base recipe that has nice slurry properties, melts well and crazes to the degree you want (which could be as simple as 85% frit and 15% kaolin). Then add colorants to get different effects (where possible, employ stains rather than metal oxides and carbonates, they are much less troublesome and don’t produce gases or metal fumes). Avoid a base recipe that calls for Gerstley Borate because it turns slurries into jelly, frits are much better melters (yes, they are more expensive but will save you from so many problems). Be sure to read up on thixotropy, that will enable you to create slurries that work so much better.

Texture of a typical raku body after throwing 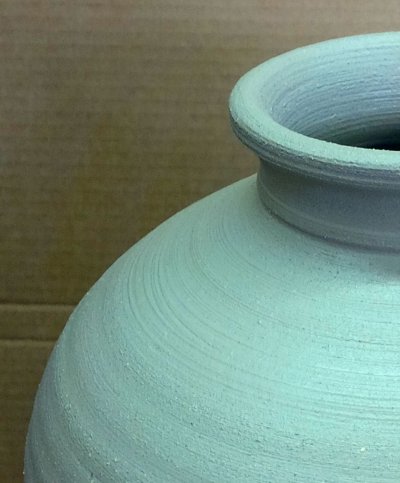