A type of ceramic glaze, typically fired around 2200F, where iron oxide in the cooling glass precipitates out to form a striking red crystalline mesh on the surface.

Iron red glazes are most common in the cone 6 range. The red color is a product of iron silicate crystals forming during the cooling cycle in the kiln. These glazes depend on having a very fluid melt (to give the iron and silica molecules the mobility they need to orient in their preferred crystal lattice) and a slowed cooling cycle (at the temperature where they form the best). While a thick application is needed to encourage the crystallization, if applied too thickly iron reds will run down off the ware. Thus experience is needed to apply the glaze just thick enough for the effect. It follows from this that alot of variation in color can be achieved by glazing uneven or textured surfaces to force thinning of the layer on the edges and angles and thickening in the recesses.

Iron red glazes are very messy to work with. And the slurry tends to turn into jelly because of the flocculating action of the iron oxide they contain (in a high percentage). If thinned with water enough to be useable the specific gravity often goes very low (leading to issues with settling in the bucket). Settling is worsened because of low clay content (necessary because Al2O3 needs to be low to encourage the crystallization but clays contain alot of it). Another issue: Some Al2O3 is needed, but if clays source all of it the high water content needed get rid of the gelling can lead to excessive shrinkage during drying (with accompanying cracking and crawling).

Iron reds can develop more metallic effects when layered over other glazes. Rutile variegates iron reds. Some potters use the purest iron oxide they can find (99%) rather than impure sources (like Crocus Martis), it seems that this would be the most melt-available and therefore crystallize the best.

From examining the chemistry of a range of iron red recipes we have noted that they have high MgO (preferably from a frit), low CaO, low Al2O3 and a high Si:Al ratio. The key to their melt fluidity is plenty of KNaO plus B2O3 or Li2O (the latter also help keep the thermal expansion down). P2O5 is known to encourage the red.

Ferro Frit 3110 (or similar) is ideal to source needed KNaO since it has almost no Al2O3 (the problem with using feldspar). This frit is also an excellent flux because it has been premelted. Since little clay can be tolerated it is best to use bentonite to supply it (bentonite is a very potent suspender and hardener because of its incredibly small particle size).

A firing schedule thought to grow the crystals slows between 1750-1600F on the way down. Since the glaze is very fluid (and thus susceptible to developing blister surface defects) it is also advisable to do a drop-and-hold rather than holding at cone 6. Holding at about 100F (perhaps 200F) below top temperature for 30 minutes will give the glaze melt (which has stiffened enough to break the bubbles which were percolating at cone 6) time to level over. The firing can then drop quickly to 1750F, hold for ten minutes, and then drop at 100F/hr to 1600F.

Various commercial glaze manufacturers have formulated iron reds that variegate between red and dark brown or black (with varying thickness) and which produce the effect without special firing. This is likely because of careful choice of materials and high frit content to get maximum melting. 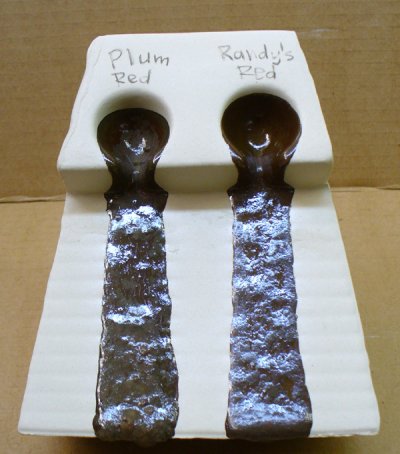 A GLFL test for melt flow comparing two cone 6 iron red glazes fired to and cooled quickly from cone 6. Iron reds have very fluid melts and depend on this to develop the iron red crystals that impart the color. Needless to say, they also have high LOI that generates bubbles during melting, these disrupt the flow here. 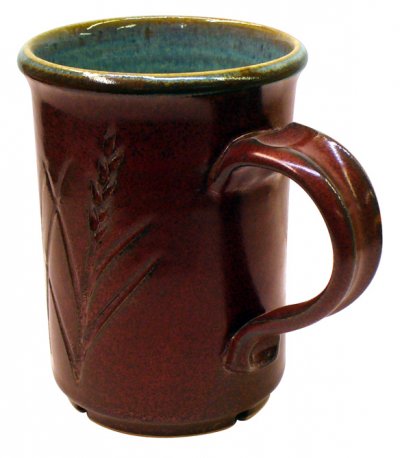 Original development of this recipe was done to match the chemistry of Randy's Red (a popular recipe). At the time we did not do any special firing schedule to encourage the growth of the red crystals. 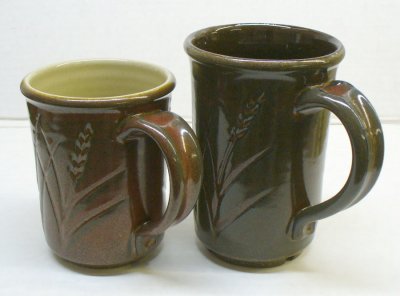 The one on the right was cooled slower. Controlled cooling in the kiln is a key to developing the color. 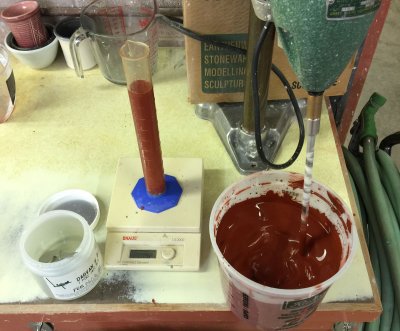 This is G2890C, a cone 6 iron red glaze. It was so gelled that it was unusable! First I measured specific gravity (with difficulty): 1.48. That's too high, so I added water to reduce it to 1.44. Then I dripped in Darvan 811 (it is recommended for iron-containing slurries). I added it until adding more did not thin it further (more was needed than for deflocculating the average non-iron-containing slurry). But it was still gelled. That means 1.44 is not a realistic specific gravity for this recipe. So I added water to take the SG down to 1.42. Now it is so much better because it does not go on too thickly when pieces are dipped.