Interpreting how high a kiln fired based on the look of the cones can be a much more complicated matter than it might first appear.

At first it seemed simple: The cone bends and the firing is done. I regarded that little cone as the one thing that was straight forward, fool proof. I could just stick them into a blob of clay without being overly concerned about different depths and angles, throw them in the kiln, and they bent over time after time. Soon, however, I had to wonder. My firings were not consistent! I blamed the clay, the glaze, the weather; everything but the way I used the cones. Well, it turns out there were instructions I failed to read. Yes, there is a lot more to using and interpreting these devices than you might have thought.

Hermann Seger studied the melt dynamics of oxide compounds and made the first cones to guide him in firing. Edward Orton followed and laid the ground work for the cones we use today. Shown here is a fragment of an Orton cone chart. As you can see, the cones bend at different temperatures according to rate of temperature rise. Hence, rather than measuring temperature, cones quantify the combined effects of time and temperature (their correct use, of course, depends on a slow enough rate of rise that the kiln fires evenly and all ware is permeated by the heat).

While this sounds like the ideal measuring system for firing ceramics in periodic kilns, in my case many things happened which began to muddy the water a bit. First, as already mentioned I needed to be able to interpret a cone to derive a number that could be recorded with shrinkage and absorption data. As a result there were questions to answer. For example, at what point in a cone's fall do you judge it to be complete? At what point is it half-complete. I made an arbitrary decision that when the tip touches it is complete, the expected heat input is achieved. Thus, I record cone 6 just touching as "6.0".

A booklet from the Edward Orton Jr. Ceramic Foundation that details the pyrotechnical theories of how cones operate. It set me straight on the value of cone plaques (setters) and self supporting cones. The book cited the amount of variation possible when cones are improperly set and contained several other revelations. For example, it had a small diagram which parallels cone-bend to degrees of temperature increase. This diagram showed that by the time a cone reaches three o'clock (3:00), it has travelled through 80% of the temperature range from start-of-bend to touching down. This meant that a cone 6 at 3:00 should be interpreted as 5.8. At 1:00, it is already 50% complete, that would be 5.5. Thus it is clear that a cone is most sensitive and best readable when it nears the end of its travel.

But now new questions became obvious: Does the fall of all cones span the same number of degrees? If a cone falls over a 30 degree range, how much does this overlap with adjacent cones. This is relevant because Orton highly recommends the use of a set of three cones (guide, guard, and firing) in each firing. The first signals when the firing is nearing completion and the last warns of over firing. In addition three will provide information that will make looking at one cone seem a bit like wearing blinders.

[conenorm.gif||] Consider the first set of cones shown here. The cone 6 is at 3:00, so I interpret that as cone 5.8. The cone 5 is well melted and the cone 7 is not started. This is a textbook situation which presents no difficulty. [coneslow.gif||]

Now look at the second set of cones here. Like the first set, the cone 6 is at 3:00, so I read it as 5.8. However, this time the cone 5 is not touching, so on its merits only I would assign the firing a value of 5.0. The cone 7 is at 2:00 which I would read as 6.7. So did I get cone 5.0, 5.8, or 6.7? To answer this, the booklet from Orton said the 'deformation of the guard cone means that heat treatment has been exceeded'. I called the Orton office, and they confirmed I should go by the highest cone to show deformation. Okay, that means I had 6.7.

But this is still somewhat disturbing. If I would have shut off the kiln when the cone 7 started to bend then the cone 6 would have been at 1:00, which is only 5.5, which is under fired. There appears to be no way to achieve a cone 6 firing!. Further, the logical explanation is that a slow firing should deform all three cones and a fast one should put the first cone down before the second even starts. However, this explanation is not adequate in my experience. The strength of cones is supposed to be their ability to measure heat work, so they should be most useful when firing speed varies.

I called Orton again and they sent charts and testing data on cones 5, 6, and 7. It was very intimidating information, to say the least. All of a sudden cones were not looking so simple; so I went to plan B.

I got a supply of Buller's rings. These ceramic devices are precision dust pressed and designed to shrink in a linear fashion with temperature increase. The advantage of rings is that one device works across a wide temperature range and expresses a discrete number representing the degree of firing. The disadvantage is that you can't tell when to shut the kiln off. So cones tell you the shut off time, rings tell you what heat-work you achieved at shut off. I began to put these into firings each day beside the set of cones and recorded the value measured with a device intended for this purpose (see diagram). For example, cone 10 yields a Buller's ring value of 40 on the scale. Cone 6 produces values from 27 to 29. One can thus conclude that even with a combination of rings and cones, we again are faced with device limitations and must apply skill and experience to achieve consistent results.

In recent years, it appears that more and more potters and small plant operators are employing electronic kiln controllers. The main ceramic industry likewise, long ago adopted these devices in the pursuit of repeatable firings. As one might suspect, electronic controllers also have their own set of surprises and trade-offs. Although it is not obvious, using a kiln controller takes us back to simple measurement of temperature. While a potter will say that his kiln fires to cone 6, a company technician will say his ware fires at 1200°C. Industry likes to have numbers for testing records and leave little to interpretation or chance.

Continuous industrial kilns maintain a constant temperature in the middle of a long tunnel, and the speed of the ware cars or conveyor through the kiln determines the firing curve each piece is subjected to. In this situation, the maintenance of a specific temperature is critical and this is easily done with high-tech hardware. Since thermocouples (the critical sensing element of industrial temperature control systems) measure only temperature, industry has little choice but to think in terms of temperature and be careful to maintain its measurement systems. In my experience, while cones can be used to determine the end point of a firing, the temperature based system seems to work very well also. If you have access to electronic controllers I recommend you go that route and use cones where they really shine: to verify the accuracy of the thermocouple, determine the degree of uniformity within the whole kiln, and act as a backup.

If you must continue with cones, you are advised to follow the manufacturers instructions (set three cones in each firing and set them properly). Self-supporting cones and cone setters are so convenient, you will kick yourself for not having used them sooner. Continue to fire to the center cone and when you examine the cones interpret the center one first, then look at the others and let them temper your initial interpretation to come up with a number that is a reasonable representation of the firing. If you can possibly build a database of cone interpretations and corresponding Buller's ring measures, you can use this additional information to further temper your judgment.

One more note: You can download software from the Resources section of the Orton website to calculate the temperature and bend angle for all cones. It is a useful tool for intrepreting cones distributed throughout the kiln. 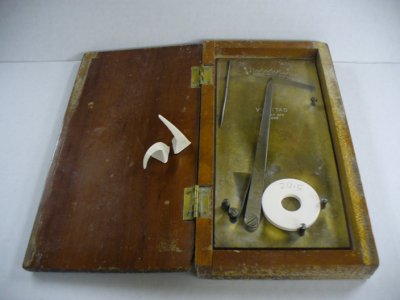 This is a Veritas measuring device. It was used to measure the size of Bullers rings. The system was set up so that an unfired ring would measure close to zero (the difference from zero was added or subtracted from the final measure). These rings provided a measure of what temperature the kiln was (as opposed to cones which say what it is). Actually, many companies placed many rings in a firing and extracted them, one-at-a-time (using a metal rod), cooled them quickly and measured them; this gave an accurate indication of the current temperature. Some companies still use these today to verify electronic measuring devices. The Orton TempCHEK system is based on this same principles, but is much more refined (and much more accurate).

Four degrees F. These are self-supporting cones, use these. I was consistently getting the cone on the left using a custom-programmed firing schedule to 2204F. However Orton recommends that the tip of the self supporting cone should be even with the top of the base, not the bottom. So I changed the temperature to 2200F and got the cone on the right. But don't assume your kiln fires cone 6 at 2200F, it could be much higher or lower, depending on your pyrometer.