A Low Cost Tester of Glaze Melt Fluidity
A One-speed Lab or Studio Slurry Mixer
A Textbook Cone 6 Matte Glaze With Problems
Adjusting Glaze Expansion by Calculation to Solve Shivering
Alberta Slip, 20 Years of Substitution for Albany Slip
An Overview of Ceramic Stains
Are You in Control of Your Production Process?
Are Your Glazes Food Safe or are They Leachable?
Attack on Glass: Corrosion Attack Mechanisms
Ball Milling Glazes, Bodies, Engobes
Binders for Ceramic Bodies
Bringing Out the Big Guns in Craze Control: MgO (G1215U)
Ceramic Glazes Today
Ceramic Material Nomenclature
Ceramic Tile Clay Body Formulation
Changing Our View of Glazes
Chemistry vs. Matrix Blending to Create Glazes from Native Materials
Concentrate on One Good Glaze
Cone 6 Floating Blue Glaze Recipe
Copper Red Glazes
Crazing and Bacteria: Is There a Hazard?
Crazing in Stoneware Glazes: Treating the Causes, Not the Symptoms
Creating a Non-Glaze Ceramic Slip or Engobe
Creating Your Own Budget Glaze
Crystal Glazes: Understanding the Process and Materials
Deflocculants: A Detailed Overview
Demonstrating Glaze Fit Issues to Students
Diagnosing a Casting Problem at a Sanitaryware Plant
Drying Ceramics Without Cracks
Duplicating Albany Slip
Duplicating AP Green Fireclay
Electric Hobby Kilns: What You Need to Know
Fighting the Glaze Dragon
Firing Clay Test Bars
Firing: What Happens to Ceramic Ware in a Firing Kiln
First You See It Then You Don't: Raku Glaze Stability
Fixing a glaze that does not stay in suspension
Formulating a Clear Glaze Compatible with Chrome-Tin Stains
Formulating a Porcelain
Formulating Ash and Native-Material Glazes
Formulating Your Own Clay Body
G1214M Cone 5-7 20x5 Glossy Base Glaze
G1214W Cone 6 Transparent Base Glaze
G1214Z Cone 6 Matte Base Glaze
G1916M Cone 06-04 Base Glaze
G1947U/G2571A Cone 10/10R Base Matte/Glossy Glazes
Getting the Glaze Color You Want: Working With Stains
Glaze and Body Pigments and Stains in the Ceramic Tile Industry
Glaze Chemistry Basics - Formula, Analysis, Mole%, Unity, LOI
Glaze chemistry using a frit of approximate analysis
Glaze Recipes: Formulate Your Own Instead
Glaze Types, Formulation and Application in the Tile Industry
Having Your Glaze Tested for Toxic Metal Release
High Gloss Glazes
How a Material Chemical Analysis is Done
How desktop INSIGHT Deals With Unity, LOI and Formula Weight
How to Find and Test Your Own Native Clays
How to Liner-Glaze a Mug
I've Always Done It This Way!
Inkjet Decoration of Ceramic Tiles
Interpreting Orton Cones
Is Your Fired Ware Safe?
Leaching Cone 6 Glaze Case Study
Limit Formulas and Target Formulas
Low Budget Testing of the Raw and Fired Properties of a Glaze
Low Fire White Talc Casting Body Recipe
Make Your Own Ball Mill Stand
Making Glaze Testing Cones
Monoporosa or Single Fired Wall Tiles
Organic Matter in Clays: Detailed Overview
Outdoor Weather Resistant Ceramics
Overview of Paper Clay
Painting Glazes Rather Than Dipping or Spraying
Particle Size Distribution of Ceramic Powders
Porcelain Tile, Vitrified or Granito Tile
Rationalizing Conflicting Opinions About Plasticity
Ravenscrag Slip is Born
Recylcing Scrap Clay
Reducing the Firing Temperature of a Glaze From Cone 10 to 6
Single Fire Glazing
Soluble Salts in Minerals: Detailed Overview
Some Keys to Dealing With Firing Cracks
Stoneware Casting Body Recipes
Substituting Cornwall Stone
Super-Refined Terra Sigillata
The Chemistry, Physics and Manufacturing of Glaze Frits
The Effect of Glaze Fit on Fired Ware Strength
The Four Levels on Which to View Ceramic Glazes
The Majolica Earthenware Process
The Physics of Clay Bodies
The Potter's Prayer
The Right Chemistry for a Cone 6 MgO Matte
The Trials of Being the Only Technical Person in the Club
The Whining Stops Here: A Realistic Look at Clay Bodies
Those Unlabelled Bags and Buckets
Tiles and Mosaics for Potters
Toxicity of Firebricks Used in Ovens
Trafficking in Glaze Recipes
Understanding Ceramic Materials
Understanding Ceramic Oxides
Understanding Glaze Slurry Properties
Understanding the Deflocculation Process in Slip Casting
Understanding the Terra Cotta Slip Casting Recipes In North America
Understanding Thermal Expansion in Ceramic Glazes
Unwanted Crystallization in a Cone 6 Glaze
Variegating Glazes
Volcanic Ash
What Determines a Glaze's Firing Temperature?
What is a Mole, Checking Out the Mole
What is the Glaze Dragon?
Where Do I Start?
Why Textbook Glazes Are So Difficult

How desktop INSIGHT Deals With Unity, LOI and Formula Weight

INSIGHT enables you to enter material analyses as recipes. This is a first step to inserting them into the materials database. Imposing an LOI and understanding how to set unity, and its connection with formula weight are important concepts.

Sometimes the relationship between the way INSIGHT calculates the formula of certain materials and the way it stores them in the materials table can be puzzling. This is especially true with clays. It is important to understand this because the best way to enter materials into INSIGHTs materials database is by first entering their chemistry as a recipe.

Consider the example of Pioneer Kaolin, a material already known by INSIGHT. This screen image shows a one-material-recipe duplicated into recipe 2 calculated as RO Unity on the left and R2O3 unity on the right. Even though these numbers look so different the chemistry for the two recipes is exactly the same, it is the unity is that is different.

Setting RO unity is not really appropriate for kaolins because recalculating the minute amount of fluxes to unity drives the alumina and silica way up and thus the formula weight is also very high. In addition, if you make even a small change to one of the flux amounts the silica and alumina numbers will change drastically. It is thus better to set the alumina at unity, then the weight will be in the expected range. If you consider that theoretical kaolin has no flux, this makes sense.

However, remember that INSIGHT remembers materials as formulas in its materials database and calculations will still work properly no matter what unity setting a material is recorded with. This is true because the proportion of oxides one to another does not change with unity setting changes.

Notice that INSIGHT shows LOI as 13.96 for both recipes on the last line of the Property list (lower left figure 1). INSIGHT knows the LOI of each material in its materials table by noting the difference between the formula weight it calculates and the one it has been given to save with the material (it assumes any difference is LOI). The 13.96 is the calculated LOI of the mix of materials in the unfired recipe. However INSIGHT also shows LOI as zero above the Property list (center left). Why? This is the LOI that we can impose on INSIGHT (forcing it to LOI adjust the formula weight). INSIGHT normally calculates formula weight using a zero LOI because it is assuming you want to know the chemistry of the fired product (which has no LOI).

In figure 2 I have set recipe 1 to display analysis and used the "Override Calculated LOI" item in the Calc menu to impose at LOI of 13.96 on recipe 2 only. Notice the formula weight for recipe 2 has increased to a typical kaolin value.* That means that raw unfired kaolin is now properly represented in recipe 2 (and ready to be inserted into the materials table if desired). Notice that recipe 1 shows no formula weight. This is because an analysis cannot, by definition, have a weight.

Figure 3 shows the material record for the same kaolin. The formula and percentage analysis numbers are shown for each oxide. You can compare these and the weight, molecular weight and LOI numbers to confirm some of the things just discussed. However why are the percentages in the materials dialog different that those in recipe 1 in Figure 2? Because I did not impose an LOI on recipe 1, if I would have they would be the same.

Do you need to know all this stuff? Not really, INSIGHT will do its calculations correctly as long as it is given an LOI compensated weight for materials entered into the materials table. There is an example in the INSIGHT manual of adding a material that shows you how to do this most effectively.

One final point: Why are there differences in second decimal in some of the numbers shown here? The answer: INSIGHT favors calculation speed over unneeded accuracy. 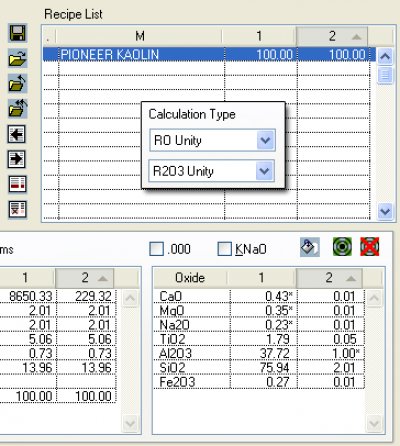 Imposing an LOI in INSIGHT

Desktop Insight can calculate the LOI of a recipe based on the LOIs it knows of the individual materials in the recipe. But sometimes you need to impose an LOI to force a calculated analysis to match an actual measured LOI in the lab. 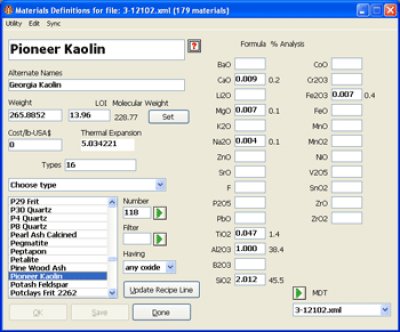