A detailed look and what deflocculation is, what the most common types of deflocculants are (there are many) and how they compare in function

The term "deflocculant" denotes a substance which, when added to scattered particles in suspension, causes a reduction in apparent viscosity. Deflocculants are substances which prevent flocculation by increasing zeta potential and therefore the repulsive forces between particles.

The mechanisms by which deflocculants act can be enumerated as follows:

Normally deflocculants act via a combination of the above-mentioned mechanisms and can be of either organic or inorganic nature. 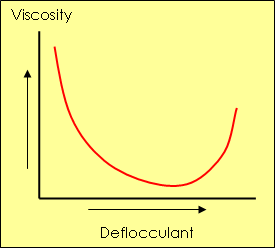 This graph shows that addition of a deflocculating substance causes viscosity reduction to a point at which the forces of attraction are neutralized. At this point, called "full deflocculation", viscosity reaches its minimum value and subsequent additions of deflocculants have an adverse effect.

The most efficient compounds having deflocculant action for uses in ceramics are sodium silicate, polyphosphates (pyro - tripoly - tetrapoly - etc.) and organic sodium and ammonium polyelectrolytes. No single product acts according to all of the mechanisms described above, therefore a mixture of various compounds is usually used, whose combined action is often superior to the sum of their single actions.

For tile pastes, the following products are most commonly used:

Some clays can be easily deflocculated using compounds which raise pH, such as sodium silicate or sodium carbonate, as these contain organic material which can react in the presence of an alkaline environment, forming deflocculant compounds.

This compound is commonly called "soda" and has the formula Na2CO3 or Na2CO3.10H2O depending, respectively, on whether it is anhydrous or hydrous. The deflocculating action is carried out by an increase in pH, but the carbonate ion, before hydrolysis, can react with calcium ions that may be present in the solution, thereby forming CaCO3 which is insoluble and therefore a flocculating element is removed from the suspension. This carbonate is often used in combination with a silicate, and the resulting mixture, whose exact proportions have to be arrived at via experimentation, is the traditional fluidifier for fine tableware, porcelain and sanitary fixtures.

This is the main deflocculant used for the preparation of pastes for casting or for refractory plastics. The ratio of SiO2 to Na2O can vary from 3.75:1 to 1:1 and is available in liquid or solid form. Sodium silicate increases the pH of the suspension, due to hydrolysis, whereas the silicon separates out in the form of colloidal silica which also performs a role as protective colloid, according to the following reaction:

When used alone, the percentage in pastes varies between 0,3 and 0,7%.

These compounds are water-soluble by-products from the manufacture of cellulose using the bisulphite method. Their molecular mass varies between 200 and 100,000, but the most common types have a molecular mass around 4000 and contain monomers on which 8 - SO3 functional groups can be found, associated with benzene rings. They can also act as binding agents for flocculant cations, but their deflocculant action is carried out by the functional groups already mentioned.

They are anionic polyelectrolytes which are strongly hydrolysed even at pH's below 5 and can be absorbed by argillaceous particles up to a pH of 10. Sure enough, dissociation in sulfonate groups - SO3Na- is considerably stronger than in carboxylic or phenolic groups associated with other polymers of natural origin or resulting from synthesis, such as humates.

Alkaline polyphosphates (normally from sodium or ammonium) are dissociated in solution and the anions are absorbed onto the clay particles, generating a strongly negative potential. Moreover they are able to capture polyvalent flocculant cations, such as calcium and magnesium, associated with water and soluble salts.

Polyphosphates evolve slowly, by hydrolysis, and are transformed into orthophosphates, thus reducing their deflocculant power with the aging of suspensions.

The main sodium salts used as deflocculants are listed on the following table.

This is a sodium phosphate triple-polymerised so as to form a single molecule with a chain structure.

Its deflocculant power is shown by an increase in negative charge on the surface of the clay particles, via adsorption of the phosphoric anion, and therefore by an increase of zeta potential which causes repulsion between the particles.

It also forms insoluble compounds with flocculant anions, removing them from the dispersive vehicle and preventing their action. In particular, the tripolyphosphate anion forms complex and highly stable anions with calcium, of type (CaP6O18)4- and (Ca2P6O18)2-.

It hydrolyses in water, increasing pH up to 9-10 depending on its concentration. Products on the market are often a mixture of different salts, mainly anhydrous and hydrous tripolyphosphates with pyrophosphate, metaphosphate and orthophosphate; in some cases there may be residues of reactants used in preparation of the product, such as monosodic phosphate (NaH2PO4) and bisodium phosphate (Na2HPO4). The content of phosphates other than tripolyphosphate must be minimum as these reduce the deflocculant capability of the product.

As for tripolyphosphate, its deflocculant power is shown by an increase in negative charge on the surface of the clay particles, via adsorption of the phosphoric anion, and therefore by an increase of zeta potential which causes repulsion between the particles. It also forms insoluble compounds with flocculant anions, removing them from the dispersive vehicle and preventing their action. In particular, the tripolyphosphate anion forms complex and highly stable anions with calcium, of type (CaP6O18)4- and (Ca2P6O18)2-.

These are polymers of the following type:

They are effective deflocculants above pH 5 for the dissociation of carboylic groups and for the absorption of polymeric anions on clay particles.

They are highly stable polymers over time and also under variation of temperature.

They do not interact with plaster moulds and can also be used for hot casting.

They have been used in the traditional ceramics sector since the 1970's.

Polyacrylic acid is obtained from polymerisation of acrylic acid, and after neutralisation with soda or ammonium, sodium and ammonium polyacrylates are obtained. The process allows for adjustment of chain length and it is therefore possible to obtain a broad range of molecular weights, whose value depends on the properties of the product.

Polyacrylates with a molecular weight between 1000 and 10,000 are energetic fluidifiers, whereas those with a weight higher than 10,000 increase viscosity in suspensions. Chains are less rigid and complex than those of CMC and thus products with low molecular weight cause little water retention.

Polyacrylates reduce interactive forces between particles, attaching themselves to those areas of the particles whose charge is responsible for the formation of three-dimensional structures.

Polyacrylates act more strongly than polyphosphates in reducing tixotropy and yield point, and, like them, are strong sequestrators of polyvalent ions.

In case of excessive dosage, yield point can be reduced to zero, in which case sedimentation may occur.

Polymers with low molecular weight of natural origin or from synthesis The functional groups of those polymers responsible for electrostatic interaction between molecules absorbed on clay particles are essentially:

This is not a true deflocculant, but it aids deflocculation by precipitating the sulphate ion which prevents the process, and is often associated with calcium, magnesium and iron which are flocculant ions.

The anion SO4= is easily absorbed by clay particles, also in substitution of hydroxyls, and prevents reduction of zeta potential.

Barium carbonate is used, even if not very soluble, as it precipitates the sulphate ion easily, whereas barium chloride is soluble but would carry barium ions into the solution which in excess would act as flocculants.

BaCO3 must be added before the deflocculants; quantity varies between 0.02 and 0.1%. 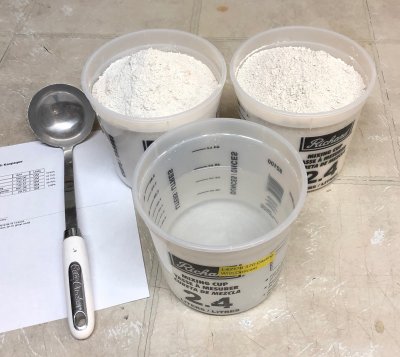